June 19th - In the Shadow of the Eagles’ Nest 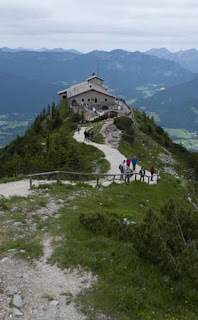 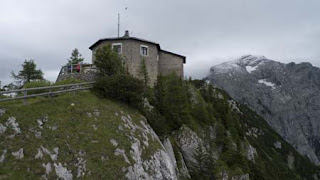 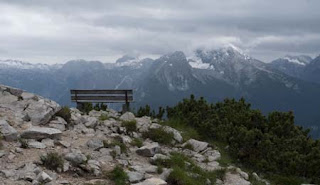 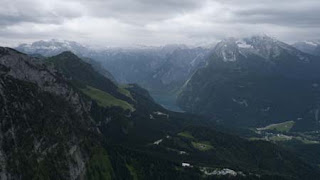 Sadly, back in the 1930s, the incredible beauty of the Berchtesgarden area, plus the quintessentially Bavarian landscapes and culture here attracted Adolf Hitler and his evil henchmen to make this their holiday area of choice, so a complex of Nazi holiday homes were built here in the mountains and valley around Berchtesgarden.

Unsurprisingly, the Allies bombed most of them to pieces and what survived was mostly destroyed to stop it becoming any kind of place of pilgrimage to the Nazis. The only relic that did survive, was the famous Eagles' Nest, a Nazi reception house built over 1800 metres high, up the top of an impossibly steep mountain. The reason that this one survived was because Hitler didn't actually like the place, as, ironically, the great Fuhrer suffered from vertigo, and didn't like the winding journey up there. In fact, he only came up here about 10 times – even so, there is something of a menacing air about the stark stone building constructed in an incredibly bleak spot (or at least it was bleak when we were up there – the howling wind made it seem an appropriately inhuman Nazi relic).

As we shivered our way around the top of the mountain amongst the clouds, there wasn't an eagle in sight – just a few noisy black crows squawking around. I guess "The Crows' Nest" wasn't a macho enough name for the Nazis. We enjoyed the spectacular views as long as our frozen fingers would let us, then we sheltered in warmth of the restaurant – we'd just seen black and white footage of Hitler enjoying a meal in the same dining room, which gave it something of a chilling atmosphere.

After our time here, we went to an exhibition that documents the rise of Nazism, and the devastating impact that it had on Germany and the rest of Europe. Again, it was chilling to see it laid out in enormous detail how this lunatic managed to employ a combination of often-logical social and industrial policies with strident appeals to the basest human instincts of prejudice and triumphalism. The exhibition showed how the Nazis were masters of manipulating PR, using groundbreaking mass media propaganda to win over the public, and employing first intimidation and then outright terror to chip away at the peoples' abilities to either see right from wrong, or to be able to resist.

As soon as he was put in power, almost by stealth, Germany was put on a war footing– it made you wonder what would have happened if he'd been faced down earlier.

Anyway, so many of his policies and tactics have such strong echoes with the politics and debates of today (especially in these times of economic crisis) – this exhibition was a very scary warning about the politics of blame and scapegoating that seem to be so prevalent today.