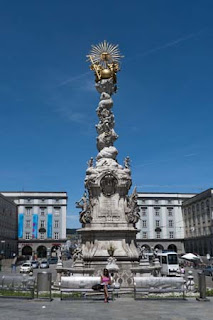 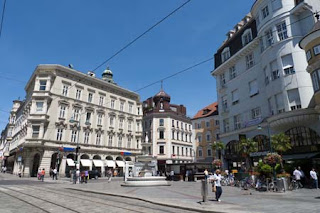 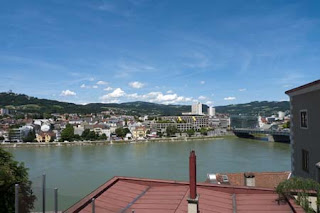 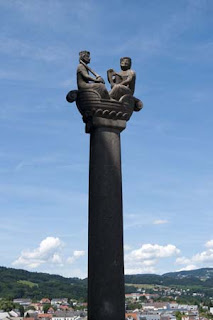 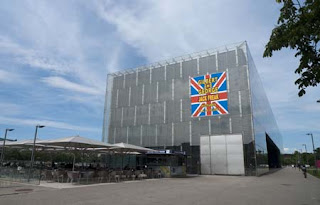 The guidebooks don't have many complimentary things to say about Austria's second largest city, condemning it for being too industrial and too boring – never mind the fact that it was Hitler's favourite Austrian city. However, we actually quite liked the place (maybe because we didn't see any of the industrial bits).

The campsite was a long way out of town, but it was a nice cycle ride through the countryside to the suburbs, and then largely on cycle paths into the centre of town. Linz doesn't have the massive set-pieces or huge boulevards of Vienna, but it has the same baroque-inspired grandeur in its churches, palaces and civic buildings. What makes it nicer is that it's not a tourist town – the Danube cruise boats only call in for short stops here – but it still has a bustling feel to it.

Other than just general exploring, the main tourist activity is to take the tram up to the top of the tall hill on the other side of the river to visit a pilgrimage church and just enjoy the views below – apparently this is the steepest train journey in the world. True to form, it was incredibly steep and the views from the bar as we enjoyed a beer were very spectacular, across the Danube, beyond the steaming factories on the edge of town, over to the mountains in the distance.

This is the only thing I'm ever likely to agree with Hitler on - Linz is a really enjoyable place to visit.