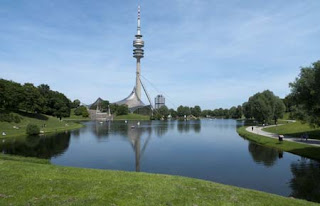 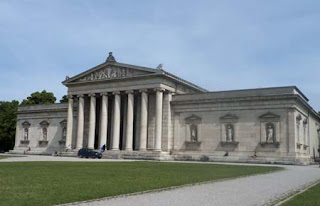 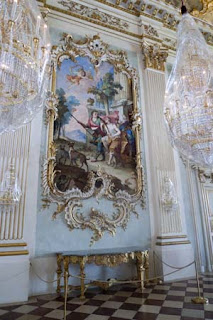 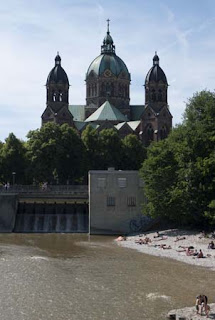 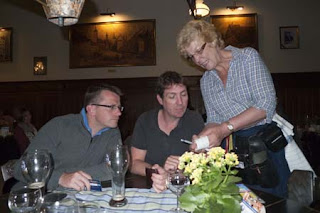 What a difference a day makes – today was beautifully clear and sunny, so it was time for us to cleanse our bodies of the beer and the pounds of undigested meat in our stomachs, and do some exercise.

Ade and Lucie hired bikes, and we took ours into the centre on the U-bahn to meet them. Munich is full of excellent cycle paths, alongside the roads and the river, which meant you didn't have to be in amongst the traffic (which was pretty light anyway – I assume all the drivers were hungover from the big Saturday night before). We zoomed over to the edge of the city to visit the impressive Schloss Nymphenburg, an opulent mini-Versailles built by the Kings of Bavaria (including "Mad King Ludwig" who we hope to see more of on this trip).

Nearby just happens to be the world's largest beergarden, which was a perfect place to re-fuel with yet more beer and meat (I went for the vegetarian version – chicken). Then we headed to the Olympic Park, the scene of the 1972 Olympics. These days it's a beautifully landscaped park where people come to skate, cycle, row, roll, and stroll – I hope that the legacy of the 2012 London Olympics is used as much by Londoners as this is by the Munich folk.

Now we went on a mammoth cycle along the beautiful river that runs through Munich – on a sunny Sunday, the riverbanks and mini-beaches are absolutely packed with sunbathers. You get the impression that the quality of life in Munich must be pretty good; hot summers, beautiful architecture, plenty of nature in the city, so many people cycling instead of sitting in their cars, plus, of course, there's plentiful beer and meat!

Over the course of the day, we reckon we must have cycled in the region of 30-40 kms, so we were fairly jelly-legged by the end of a beautiful afternoon. The only way to rejuvenate was to head to a traditional Bavarian restaurant for, you'll never guess what, more beer and meat. The elderly waitress didn't speak English and was in no mood to tolerate our ignorance of her language, so we collectively decided to go on a huge charm offensive to draw a smile out of her and stop her being so grumpy. Normally, when faced with such sullenness, I veer towards the offensive rather than the charm, but by the end of it, we had her laughing and joking with us (even though no-one understood a word anyone was saying); although by the end Tracy got a little over-enthusiastic and planted a big kiss on her dumbfounded cheek as we said goodbye at the end of the evening. Anglo-German relations were at an all-time high.