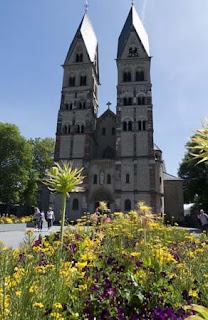 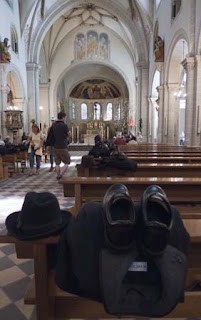 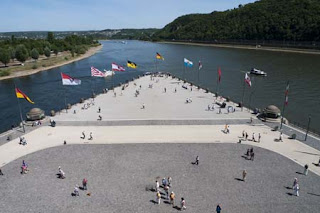 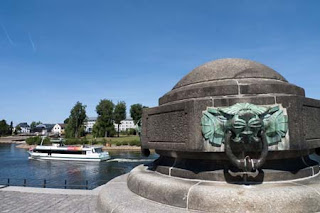 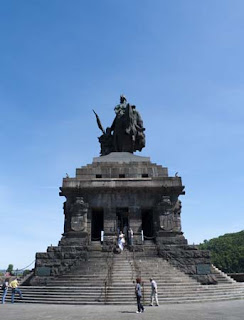 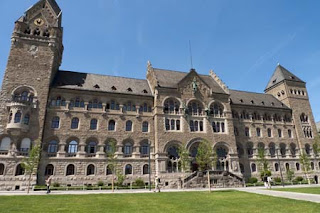 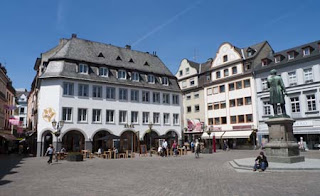 When the sun is shining, Germany is a gorgeous country – especially now that we're in wine country, and the rivers are lined with steep hills of green vineyards.

I'd always thought that Koblenz was in Poland, but it turns out that it's about halfway down Germany, at the point where the Mosel and the Rhine Rivers meet – a strategic position that means that it's been important throughout history, from the Romans right up to today.

After just a measly 8km ride into town along the river, we arrived at the so-called "Deutches Eck", "the German Corner", where the 2 rivers meet, marked by a huge statue of Kaiser Wilhelm I, the man in whose name Germany was united in 1871. The statue was destroyed in the Second World War, and the enormous plinth lay empty until Germany was re-united in the 1990s. I'm not sure if this bombastic symbol of German Imperialism fits with everyone's vision for modern Germany, but the Koblenzers appear to like it.

This summer, the whole of Koblenz appears to have been taken over by a huge garden festival called BUGA, which, having peered through various fences to see what all the fuss was about, didn't appear to be worth the €20 admission to get in. In fact, if you weren't into all the BUGAry, then there wasn't much else to do in town.