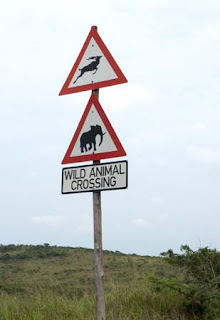 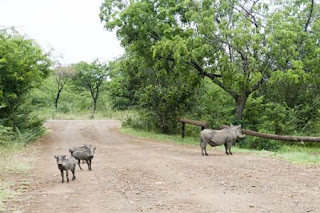 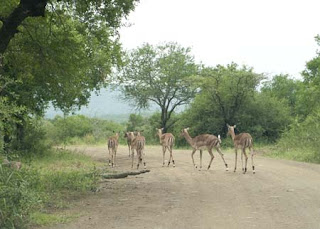 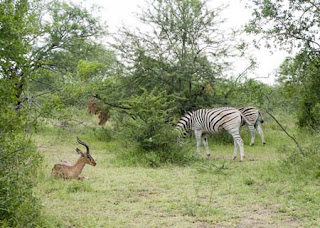 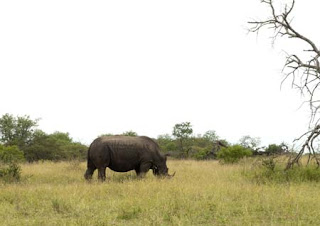 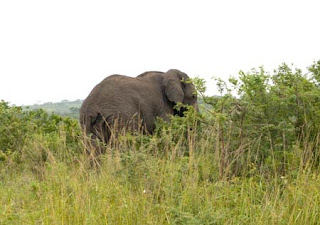 Having done a few game drives in the Hluhluwe-Umfolozi Game Reserve before, today we decided to get a different perspective on things, by hiring a car and doing it ourselves. After many tortuous email conversations with the car hire company, we were relatively confident of there actually being a car waiting for us at the port.

Unfortunately, the man delivering it, a nice but nervous chap delightfully named "Attention", was operating on African time, so we had to wait around at the port till we were just about to give up, when he finally screeched up to the gates. Having also been assured that we'd be supplied with a map to enable us to find the way there (it's about an hour and a half's drive from the ship), he informed us that he'd forgotten it – he was soon Christened "Attention Deficit" or "Attention to Detail" by us.

So, we finally got going with the vaguest of vague set of directions, but somehow we managed to find it, avoiding lots of cattle on the road as we got close. Driving around in a country with such a crime rate and with such a high accident rate had already sent Tracy's adrenaline levels into overdrive, but once she arrived at the game park she was now beside herself with concern about possible animal attacks. She read the park's safety briefing in minute detail, and interpreted a clause that said that we should shut our windows when 50 metres from any monkeys, as meaning the windows must be shut at all times – like a shut window would deter a charging rhino?

She then frantically quizzed the ranger about whether we were going to get mauled by a lion – he didn't really understand her question, and told her that there were lions on the road yesterday, so yes we should see some. This didn't help.

So, we set off nervously and began our adventure. Fairly quickly we saw some impala and a wild dog (we think called an Erewolf); and then we got to her first sphincter-troubling sighting, of a couple of armour-plated rhinos by the side of the road. The mixed instructions of don't get too close, and drive away asap were happily ignored by me, and we turned off the engine (keeping the safety windows up obviously), and watched these magnificent creatures happily munching away on the grass and totally ignoring us.

The fact that we weren't charged by the rhinos calmed the passenger down a little, so we carried on our voyage of discovery – only stopping briefly, when we saw some workers at one of the lodges sitting in the open by the side of the road. Tracy bravely wound her window down an inch and repeatedly shouted at them, "Aren't you worried you're going to be eaten by lions?". Fortunately they ignored her alarmist warnings with a bemused look that said, just go away.

It's definitely a different experience driving yourself on safari – it's you who has to worry about avoiding ruts and potholes in the track, and it's down to you to spot the animals – but in many ways, it's more fun, because it feels like a real adventure. You don't have the security of a guide with a gun to protect you, and you feel just that bit more vulnerable – it gives a real added edge of excitement.

So, we slowly relaxed into the adventure and got pretty good at animal spotting – we ticked off zebras, wildebeest, water buffalo, gibbons, lots more rhinos, and at the end, we were really pleased to get an upclose viewing of an elephant.