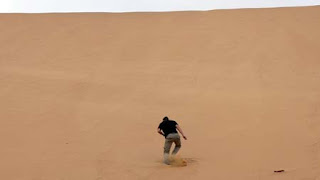 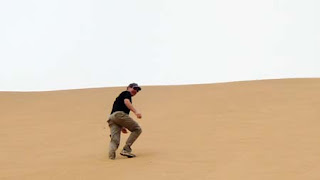 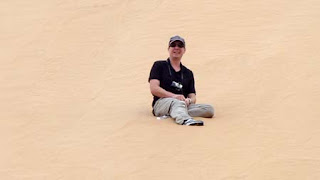 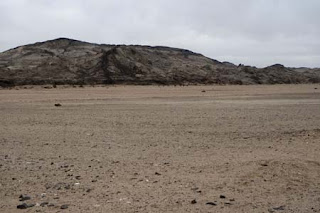 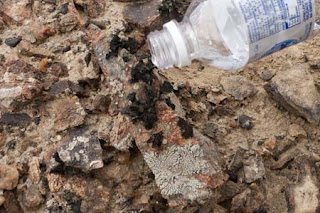 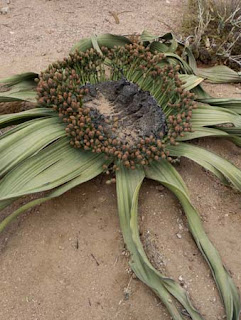 After all the excitement of last night, this morning I got up at the crack of dawn to do the "Treasures of the Desert" tour – a tour that took us out to the bleak stony desert behind the town of Swakopmund. At 7am in the morning, it was pretty cold, and at our first couple of stops we were blasted by an icy wind blowing up from the Antarctic – aren't deserts meant to be hot?

In our 4x4 vans, we passed along dried up river beds, in between ghostly landscapes of jagged rocks streaked by undulating lines of minerals. It looked like one of the most bleak places on earth, but even here in this mysterious moonscape, we saw animals and plantlife that somehow survived. We passed a lone antelope and a couple of groups of ostriches filing along; but it was the flora that really impressed.

In this most dry of dry environments, that plantlife has somehow adapted itself to the arid conditions. We saw lichen attached to rocks that looked totally dead and dried out, but when our guide poured some water onto it, it suddenly sprang into life, its black leaves unfurling miraculously and turning bright green. It was like looking at some kind of bizarre scientific experiment. The lichen waits in this dormant state until a morning fog blows in from the cold South Atlantic and briefly revitalises it, before it shuts down again during the scorching heat of the day.

Next, we saw one of the weirdest plants that I've ever seen, the Welwitchia – a prehistoric-looking plant that was only discovered in the late 19th century. With its thick green leathery leaves, blood red fruits on a thick,low-lying stem, the plant looks like a reject from The Little Shop of Horrors, and lives for hundreds of years in the dry desert – our guide reckoned the one that we saw was about 600 years old.

After bouncing around this other-worldly landscape, we headed back to Walvis Bay via Dune 7. Last year, Tracy and I tried to climb it and gave up about half way, so this time I was determined to get to the top. I'm not sure which was weaker, my legs or my will, but I reckon I got about three-quarters of the way up this time, before I felt like my lungs and heart were going to explode. The higher you got, the softer and more unstable the sand got, so with every step, you sank virtually the same distance back down.

If we come back next year – I vow that it will not defeat me!