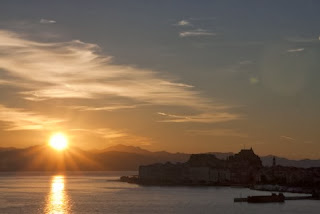 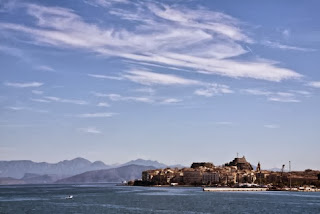 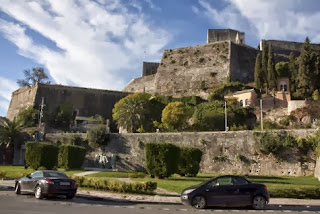 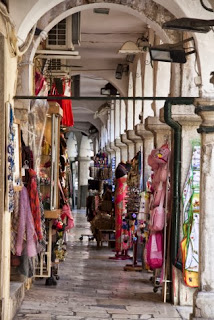 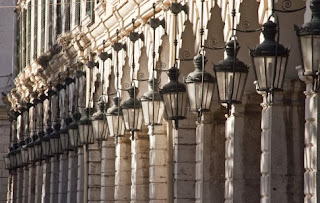 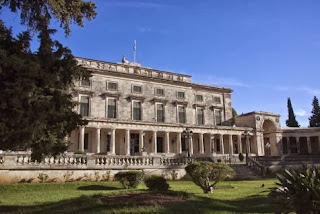 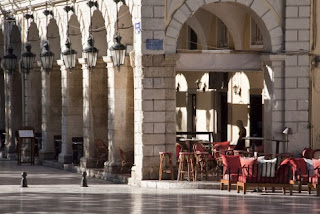 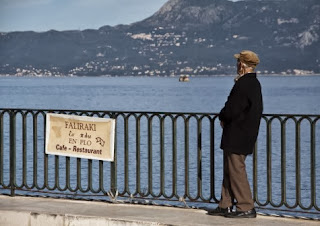 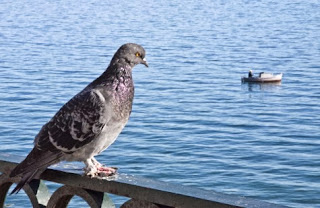 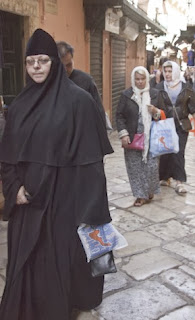 The glorious autumn weather continued today, so we decided on a day of walking around Corfu Town and enjoying its cosmopolitan mixture of architecture. Over the centuries, the island has been governed successively by the Venetians, the French and the British, and traces of each of them can be found in the buildings of this attractive town.

The Venetian influence is probably the dominant one – not surprising, seeing as they were in charge here for over 500 years until 1797. Their legacy is immediately obvious as soon as we sailed towards the town, in the shape of the two huge stone fortresses that guard either side of the harbour – for the Venetians to go to this much trouble in building those fortresses, they must have thought Corfu was well worth defending.

All around the Old Town, there was plenty of more subtle Venetian heritage on offer, in the shape of the attractive Italianate architecture in its narrow lanes. These crumbling old 4 and 5-storey buildings gave the backstreets of the Old Town, the feel of a down-at-heel Venetian district, or a chaotic Sicilian town.

In 1797, it was the French who sent the Venetians packing, and though they didn't hang around for long (they were in turn chucked out by the British in 1815), they left their mark in the graceful Parisian arcades of the Liston – this is definitely the most attractive part of town, which shows that the French had great taste, if not great staying power.

The British had similar lofty ideas for Corfu Town, so they set about introducing the ultimate civilising force on the locals – the game of cricket – by building a cricket pitch, complete with bandstand in front of the Liston. It appears that the French may have won this battle for the minds of the locals – the cafe society of the Liston continues, but games of cricket are sadly increasingly rare these days.

The British buildings that have stood the best test of time in Corfu actually had Ancient Greece for their inspiration. To see this in action, we visited the grand neo-classical palace that was the former residence of the British High Commissioner – the Palace of St Michael and St George, which now houses the Museum of Asian Art. The collection was quite good, but I was most interested in looking round the building that was the home to this rather unlikely outpost of the British Empire.

Having sampled all these foreign influences, it was time to spend some time enjoying some traditional Greek pleasures, sitting in an outdoor cafe and watching the world go by. End of season Corfu is much quieter and much more pleasant than in the height of summer, when it gets rammed with scantily-clad holidaymakers.

Actually, aside from cruise ship passengers, the only other big group of foreign visitors were Russian pilgrims on a trip to see the island's patron saint, St Spiridon. Seeing a group of Russian nuns walk by, looking like extras from Monty Python and the Holy Grail, made for a bizarre sight, as the souvenir shopkeepers gave up all hope of selling them a fake Chanel Bag or Hermes scarf.