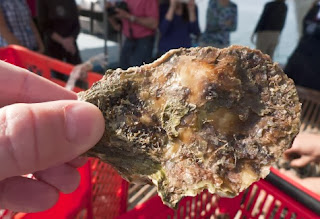 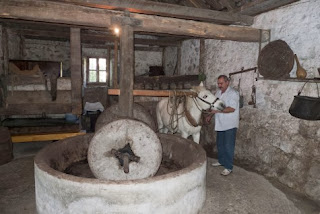 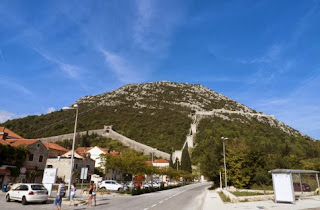 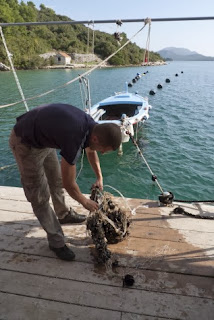 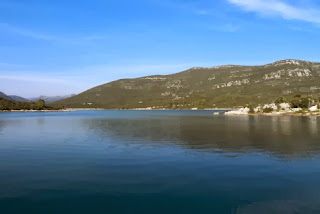 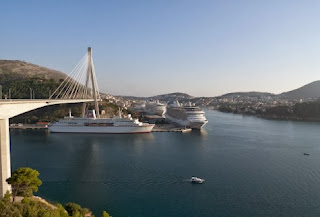 When there's a lot of cruise ships in, Dubrovnik can become a bit overwhelmed with tourists – its historic streets chock-a-block with tour groups. Which was why, with 5 ships in today, it was a good idea to join a tour out of town that took us along the beautiful Croatian coastline to sample some of the wonderful food and wine they produce here.

We first went to a traditional farm where they showed us how olive oil was produced in the old days – a cute white horse driving the stone press that ground the olives, before a couple of us were roped in to powering the final press of the ground olives. This incredibly labour-intensive ancient press was still in use right up until the 1990s, and the farmer told us how glad he was to now use the mechanised press in the village co-operative instead, even if he did prefer the taste of the old style olive oil.

By 10.30am, we were tasting his home-produced olive oil, ham and cheese and drinking wine, which rather set the tone for the rest of the day – a day of culinary indulgence. We then drove onto the medieval city of Ston (appropriately enough, its ancient buildings and amazing city walls that snaked up the mountainside were all made out of grey stone); and here, we got a chance to taste the freshest of fresh mussels and oysters. We took a boat out to the oyster beds in the tranquil bay, and they fished out a rope of oysters and mussels, picked the largest ones, opened them up, and served them straight up for us.

Eating raw shellfish can be a bit of a worry, but when they have literally come straight out of the water, that must be as safe as it gets – and as tasty as it gets too, they were creamy and delicious. After a plateful of these fresh oysters on the boat, it turned out that this was just the hors d'oevres, as we went straight to a local restaurant, to eat yet more oysters (fried this time), plus seafood risotto and pasta, washed down with more wine.

In spite of vowing that I'd never eat again, somehow I still managed a big meal in the evening – cruising does stretch the stomach.