Back in ancient times the island of Paros was the chief source of marble for the best of ancient Greek sculpture – the Venus de Milo and the Winged Nike of Samothrace were both created from Parian marble. And even if there’s nothing ancient left standing on the island today, you don’t have to look hard to find traces of Paros’s marble-lous past. Facing Parikia’s waterfront, the walls of the old Venetian castle are made up a jumble of old marble columns, blocks and pediments – so many that you think that the temple they were taken from must have been pretty impressive.
And, walking around town, you notice that so many of the houses have blocks of ancient carved marble or columns set into their walls or used as window frames. Those picturesque narrow streets were lined with shop after shop selling floaty dresses and sandals – it was a commercialised atmosphere, but more low-key and less high-end than Mykonos.
Actually, they always used to say that Paros is like Mykonos used to be 30 years ago. But, Paros is definitely on the same path as Mykonos – you just had to look at the hordes of young people piling off the ferries that were arriving fairly constantly, to know that word has got out about this lovely island. I was surprised at just how busy those packed ferries were – not much room for social distancing in the queues to get on and off.
In fact, seeing those crowds of carefree (and probably unvaccinated) youngsters made us cancel our plans to catch the bus to Naoussa, so we limited our exploring to Parikia instead. Surprisingly, the town wasn’t massively busy (the hordes just dissipated to their beach resorts around the island), so it was fun just to wander the maze of picturesque streets and see what we came across next.
We called in at the Archaeological Museum to see its collection of marble sculptures. Of course, the best sculptures from Parian marble were sent off all around the Ancient Greek world (Paros wasn’t really a centre for sculpture at all), but there were a few interesting pieces to look at -  my favourite being a fearsome looking Gorgon from the 6th century BC.
We also called in at the Church of Our Lady of 100 Doors – an intriguing complex of interlocked religious buildings that dates back to the 6th century AD, making it one of the oldest functioning churches in the world.
By now, it was getting super-hot, so we retreated back to the ship until things cooled down a little. We waited until the sun was going down before heading to the town’s small beach for a swim. Paros is famous for its fabulous sandy beaches, and while the town beach isn’t a patch on the island’s more famous ones (it’s a little rocky underfoot as you walk in), it still felt pretty idyllic as the light turned golden and you could lie in the warm sun without being roasted alive.
The perfect way to finish another wonderful day in the Greek Islands. 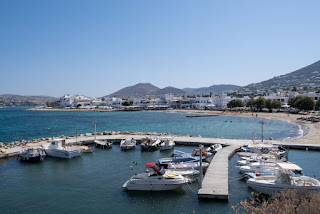 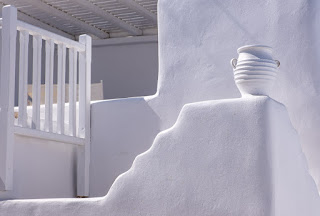 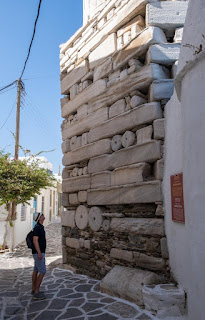 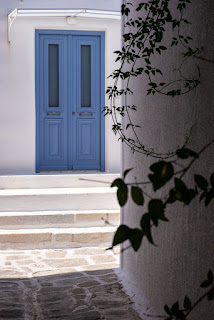 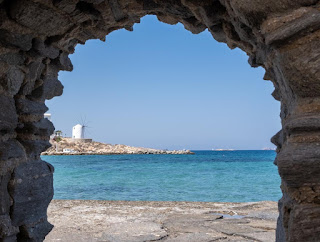 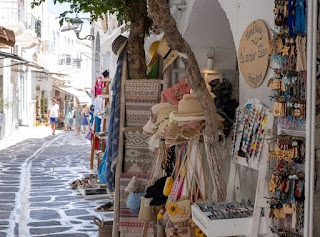 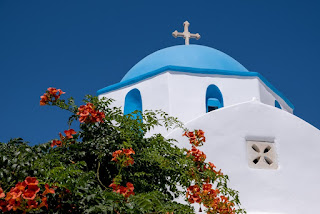 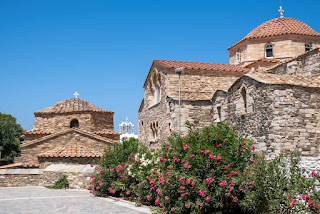 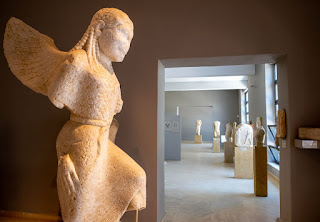 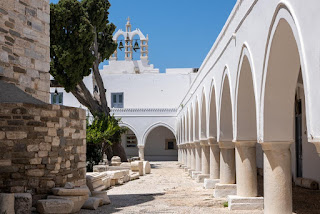