July 8th – Getting Back to Cruising

For all of us it’s been a long and hard 16 months since this horrible pandemic began, so for a couple of people who have been used to a rootless (and to some degree carefree) existence for the last few years, you cannot believe our excitement at getting back to seeing the world again.

We have flown to Athens to join Silversea’s newest ship, the Silver Moon, and we are having to pinch ourselves that we are in another country, experiencing different (ie better) weather, and enjoying our world as it used to be. That’s not to say that international travel isn’t without its worries – a constant nagging concern that you haven’t got the paperwork you need; being completely unused to being in such close proximity to so many people at the airport and on the flight; and a nagging fear of being infected when you’re so close to getting onboard.

Fortunately, all the worries have been unfounded and the flight and immigration all went smoothly, as long as you don’t mind every queue taking at least twice as long as it used to. On the way, we tested ourselves before the flight; we were tested on landing; and we were tested before we were allowed to board – so, we couldn’t have felt much safer.

And, what a sigh of relief we breathed as we stepped onboard. We’ve had enough of the “real world” – that’s been distinctly unenjoyable since March 2020; it’s time to enjoy the wonderful escapism of cruising. So what if we have to wear a mask when we walk about the ship – everything else is reassuringly the same. Within minutes, it’s obvious that everyone onboard – the crew and passengers alike – have that same feeling of relief, a sense of homecoming, a sense of escape.

It’s almost like the world’s gone back to normal…. 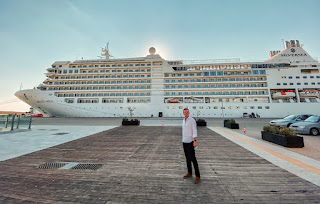