Nov 11th – Inside The Pyramids 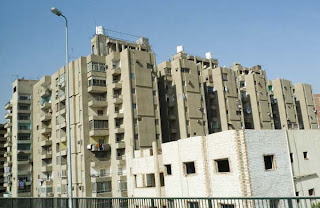 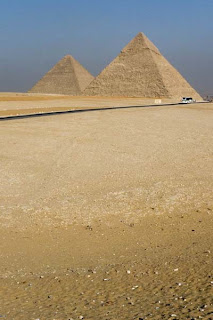 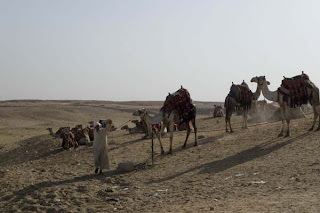 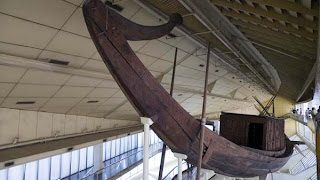 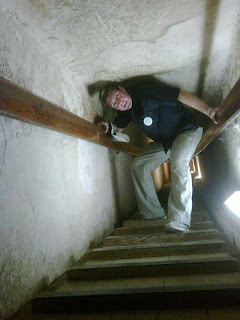 As we took the long coach ride from Port Said to Cairo, for the first section of the journey, the road was running parallel with the Suez Canal – it made an extremely bizarre sight looking across the desert and seeing a supertanker gliding serenely by.

As we got closer to Cairo, the traffic got steadily heavier and more manic – the Cairo ring road is made with 4 lanes, yet somehow, the locals squeeze six or seven actual lines of traffic into it. Amazingly enough, as they squeezed past each other as fast as they could go, honking furiously, we only saw one minor accident.

The pyramids seemed quieter than I can remember them ever being (presumably because this is the end of the season), so the lines of hawkers and touts weren't quite as annoying as usual. We went to see the amazing Solar boat, a perfectly preserved 4,000 year old boat that was discovered in the 1950s, buried next to the Great Pyramid. As you walked around the large cedar boat, which looked like it could have been just a hundred years old, you really had to keep reminding yourself just how old it was.

Next, we decided to risk the curse of the Mummy and venture inside one of the pyramids. This is not for the faint-hearted, the claustrophobic, the physically impaired or anyone who doesn't like breathing hot stale air that feels like it's 4,000 years old. You descend into the pyramid down a very steep ramp through a 3 feet high opening, and as you crab down, bent over double, the air becomes ever more fetid and musty.

At the bottom, you can stand up, but then you have to ascend up an equally small and steep ramp, right into the bowels of the pyramid. Feeling like Indiana Jones as you reach the centre of the pyramid, you can't help but keep a lookout for booby traps, before you emerge into the chamber that contained the tomb of the mummy.

They say it's better to travel than to arrive, and the journey to get there is probably more interesting than the mummy's tomb itself, because it's totally empty apart from his granite coffin, which is also vacant – the tomb raiders and archaeologists have removed absolutely everything. Having said that, there is definitely a spooky and mysterious air to the place, especially when the other tourists had moved out, and there was just us two left in there. You can't help wondering what if there was an earthquake, and our exit became blocked….

At this point, and trying to prevent ourselves from hyperventilating, we quickly decided that enough was enough, and we hurried out – the dusty, smoggy Cairo air has never tasted so good!