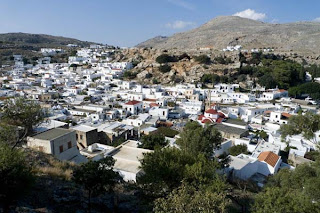 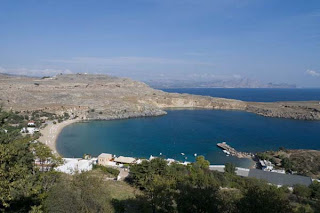 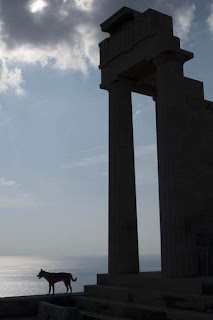 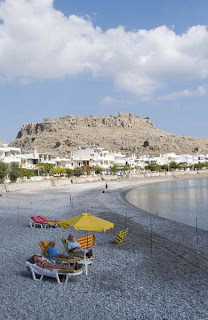 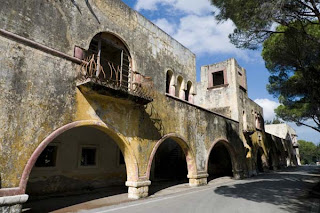 As today was our 10th wedding anniversary, we decided to get away from it all, and hire a car to explore the island. We had last done something similar in Rhodes, on our first holiday together when we were 19, when we had hired a 50cc moped, that struggled to make it up any hills and moved so slowly that it didn't even hurt us when Tracy crashed it.

We got off the ship first thing to try to avoid the crowds that flock to Lindos, Rhodes' most beautiful town, about an hour's drive from the ship. So, we managed to explore the stunning acropolis, with its mix of Ancient Greek temples, Byzantine churches and Crusader fortifications overlooking the town and the blue sea, without having to share it with any other tourists. As we were leaving, chaos was beginning to break out, as about 10 coach parties from a massive Costa Cruise ship all descended at once and the place was instantly overwhelmed.

We escaped the tourist crowds and found a peaceful fishing village to have a coffee overlooking the sea, before planning our route into the centre of the island. We drove up the twisting road up Rhodes' highest mountain, and found some decaying but really interesting buildings built by Mussolini in the 1920s during the Italian occupation – a crumbling art deco sanatorium felt like the hotel out of The Shining, while a recently refurbished hotel built in Alpine lodge style, seemed completely out of place in the hot Mediterranean.

We then had a lovely lunch in a little country village which felt a world away from the tourist development on the coast, before a scenic drive back to the ship for Jon's late afternoon lecture. On the way, we somehow managed to discover the hotel that we had stayed in, back in 1990.