Nov 26 – The Reign in Spain is Mainly in Valletta 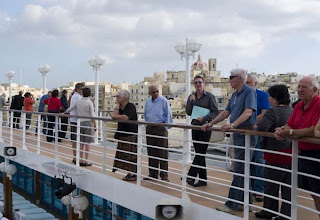 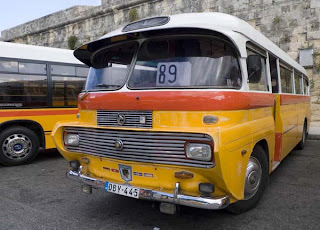 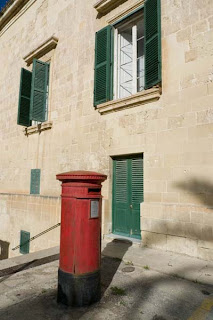 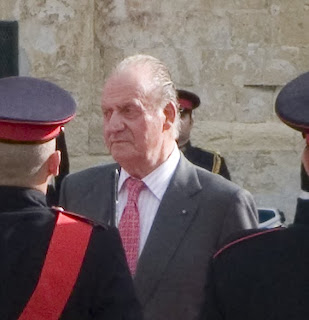 As we were sailing into Valletta's magnificent harbour at 10.30am, I was out on deck with a roving microphone, giving a commentary of what we were passing by. Not only is this the largest natural deep water harbour in the world, but it's also surrounded by an amazing array of huge bastions, imposing forts and massive walls that enclose the grand palaces and baroque churches built by the Knights of St John in the 16th-18th centuries. Everything is made out of golden limestone, which was positively glowing in the hot sun - this has got to be one of the most impressive settings for a sail-in in the Mediterranean.

Being a former British colony and military base, Malta is has a lot of British shops, which meant that Tracy could stock up on a few British essentials, while I went on a search for wine gums.

By chance, it turned out that the King of Spain, Juan Carlos, was in town on a state visit, so we went to the square in front of the Presidential Palace, to await his arrival. From living in Spain, we know that it's considered bad manners to arrive anywhere on time, so of course, he was running 20 minutes late. It was by now, midday and absolutely boiling in the sun, as we slowly roasted, and the hundreds of Maltese schoolchildren began to wilt. Even the guard of honour were feeling the heat – 2 soldiers literally had to be carried out as their knees buckled in the heat.

Eventually Juan Carlos turned up, so we got to see him inspect what was left of the guard, and we listened to the military band play the Spanish and Maltese national anthems (the jaunty Spanish number seemed to win the competition for the best tune).

After all this excitement, we found a cool (trendy cool and most importantly temperature cool) café for lunch, and then went for a bit of culture in St John's Co-Cathedral, the main church of the Knights. The Cathedral has a fantastically ornate baroque interior, and its floor is lined with the marble tombstones of the Grand Masters, decorated with a bizarre mix of cheerfully chubby cherubs and menacingly macabre skeletons. The highlight for us, were two wonderful masterpieces by Caravaggio – the longer you looked at them, the more interesting they got, as you noticed the subtle messages Caravaggio intended with his carefully arranged composition and lighting.