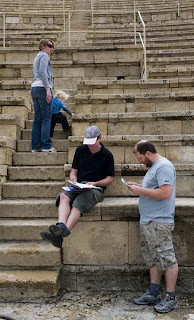 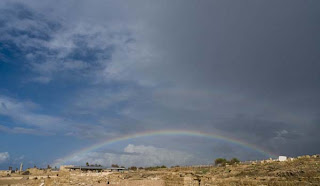 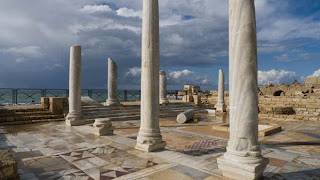 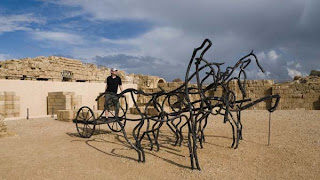 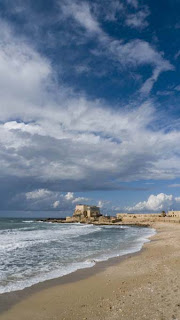 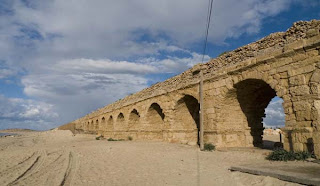 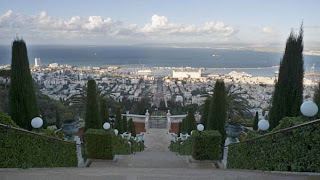 From Tel Aviv, we drove up to Haifa, stopping at the ruins of ancient Caesarea on the way. After the Jewish Revolt and the demolition of Jewish Jerusalem, Caesarea became the most important city in Palestine, and one of the most important ports in the Roman Empire. In a huge logistical exercise, King Herod built an enormous Roman city and man-made harbour in amongst the sand dunes, with a 15 mile long aqueduct, a large theatre, a fantastic sea-side hippodrome and baths complex.

These are really interesting ruins to visit, with a fascinating story that incorporated Herod, Pontius Pilate, St Paul, the Byzantines, the Crusaders and the Ottomans, and the best thing was, that there were hardly any other tourists there.

After Caesarea, we drove up to Haifa where the ship was docked. Haifa is built on more hills (and steeper ones) than San Francisco, so we were glad we weren't doing this on foot. At the top of the hill, we looked down the beautiful Bahai Gardens, a series of hanging gardens that cascade down the hill towards the port. Bahaism is an obscure religion which has 5 million devotees around the world – they believe that all the prophets – from Buddha, to Moses, to Jesus, to Mohammed, were all linked and were followed by the founder of their faith Bahualla, who lived up the road in Akko. I don't really know much more about them, other than that they must have been very keen on gardening, because these are some of the most perfectly manicured gardens I've ever seen.