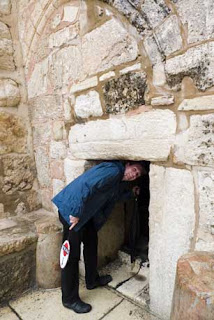 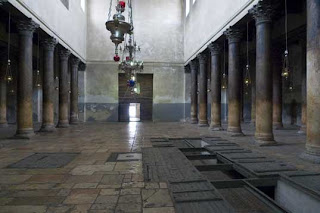 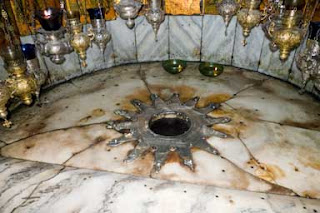 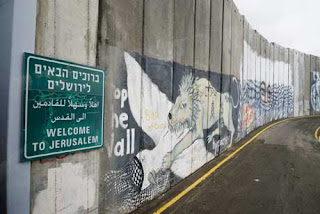 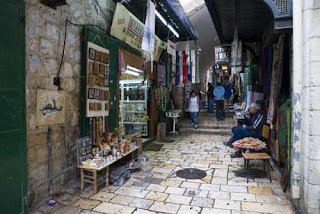 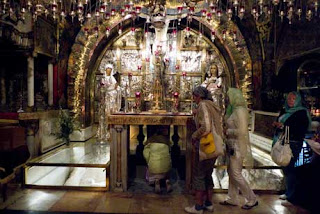 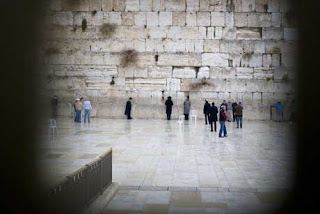 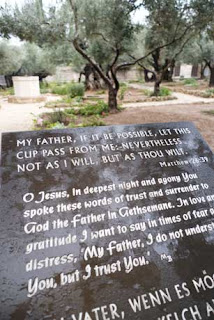 We woke to find that it was still pouring down.
We made our way through the traffic to the Little Town of Bethlehem, a few miles from Jerusalem. The modern reality doesn't reflect the cosy scenes from our Christmas cards, because this Bethlehem is now enclosed within the concrete barricades that surround the areas governed by the Palestinian authorities. So our Israeli guide had to get off at the border, and a Palestinian guide replaced him, to give us our tour of the city.

Bethlehem doesn't have much else going for it apart from being one of the most important pilgrimage sites in the world, so every second shop is a souvenir shop, selling every kind of Jesus-related memorabilia you can possibly think of, running the full gamut of taste and tackiness. So, after the inevitable long stop in the souvenir shop, we made our way to the Church of the Nativity, covering the grotto where Jesus was born. This is one of the oldest churches in the world, and it did have a powerful aura to it, inspite of the hordes of tourists and pilgrims thronging it. We joined the long queue to see the actual spot of Christ's birth, and after an hour of coping with jostling and shameless queue jumpers, the restless mood finally lifted as we got to touch the star in the ground that covers the exact location – it was a moving experience.

At the end of the visit, our coach then passed our way through the armed checkpoints, barricades and razor wire that fence off the birthplace of God's messenger of peace, and we went back to Jerusalem. We followed the pilgrim route to the Church of the Holy Sepulchre, the place where Christ was crucified and laid to rest for 3 days before the resurrection. There is a very sombre atmosphere to the Church, where the mood of some of the pilgrims is beginning to border on hysterical, as you climb up the hill of Golgotha, where the crucifixion took place and then down to his tomb.

We then followed the Via Dolorosa through the maze of Jerusalem's historic streets, following the path of Jesus (in reverse) as he carried his cross to the place of his crucifixion. It was bizarre to think about the earth-shattering events that took place here two millennia ago, and contrast them with the commercial and tourist activity that carries on here in everyday life.

Next we went to another emotionally charged pilgrimage site, the Wailing Wall – all that remains of Jerusalem's Temple, that was destroyed by the Romans almost 2,000 years ago. Here, the devout Jews come to pray at the holiest spot of the Jewish faith, in the shadow of the Dome of the Rock mosque. There's a slightly frenetic air to this place as well – the epicentre of so many conflicts over the years.

Our time in Jerusalem was fast running out, so we had a whistlestop visit to the Garden of Gethsemane, where Jesus spent his agonising last moments before his arrest and trial. Next we were told we were going for a quick visit to a museum to see the Dead Sea Scrolls. In how many other cities, would the Dead Sea Scrolls be just another minor museum, that you squeeze into a spare 15 minutes?

What a place. What a country.