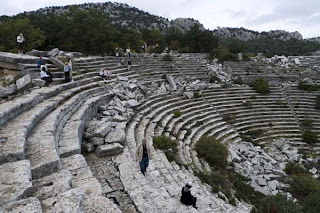 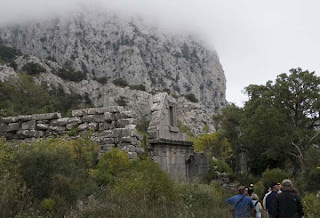 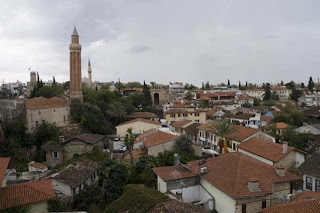 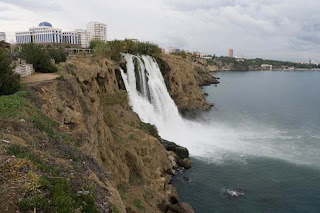 From Antalya, I did the trip to the ruined ancient city of Termessos high up in the mountains above Antalya. Termessos was once a powerful Greek and Roman city, built with formidable defences that were able to withstand an attack by Alexander the Great (the only city he wasn't able to conquer). It's since been badly damaged by earthquakes, but it hasn't been excavated at all, which makes it an atmospheric but very challenging site to explore.

This site is over 1,000 meters high in the mountains, and the once in the car park, you have an extremely steep climb up the hill, through rocks and trees, passing fallen down blocks of stone and marble columns lying abandoned in the undergrowth. The fact that it had rained the night before, made it extremely slippery and some of the passengers struggled with their footing.

The hard climb was definitely worth it, as at the top, we now had access to one of the more interesting ancient sites you can visit – a magnificent theatre overlooking the mountain, huge cisterns hollowed out of the rock, a large gymnasium with intricately carved lions' heads for rain spouts – all with no other tourists.

The climb down was marginally less dicey than the ascent, and the sense of achievement (and relief) gave everyone a brief boost, before we snored our way back in the coach.