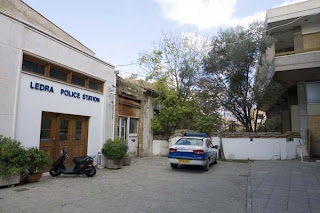 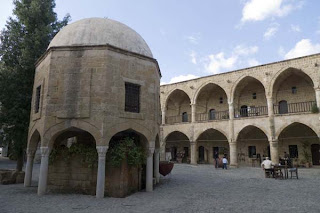 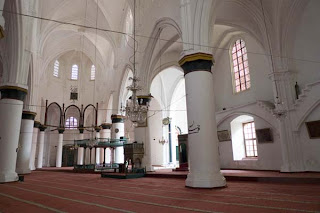 From Limassol, we travelled to the centre of Cyprus, to visit the island's divided capital, Nicosia (or Lefkosia as it's known to the Greek Cypriots). In 1974, the Turks invaded Cyprus and occupied the Northern half (37% actually) of the island, ostensibly to protect the interests of the Cyprus's Turkish population who made up 18% of the population.

With the fall of the Berlin Wall 20 years ago, Nicosia has been left as the only divided capital city in the world, with a depressing dividing line of army posts, barbed wire, blocked up roads, and a buffer zone of decaying and abandoned houses, running through the centre of the city, separating the Greek and Turkish Republics (actually, no country in the world, apart from Turkey, recognises the Turkish Republic of Cyprus).

Our Greek Cypriot guide gave us a fairly partisan account of the Turkish invasion and occupation – lots of talk of "illegal occupation", "stolen property" and "Turkish atrocities", so it was pretty difficult to come away not feeling sympathy for the Greek side.

We passed through the checkpoint at the Green Line, to pass into the Turkish side, and it was an odd feeling to think that you were in the same city, with pretty much the same architecture, food and look of the people, yet you had now passed into a different country and hotly disputed territory.

Things definitely didn't seem as well off as in the South, but really there was little difference, apart from the prayer calls from the mosques, competing with the bells from the churches in the South. The most interesting building was the Gothic former cathedral of Saint Sofia, which is now a large mosque – an odd experience visiting what was obviously a medieval cathedral, now whitewashed, carpeted and empty of furniture.