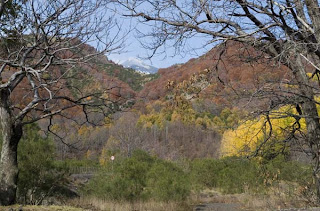 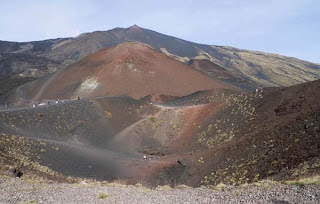 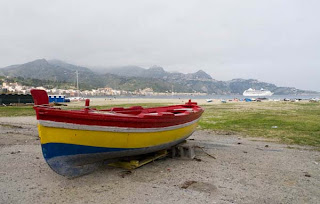 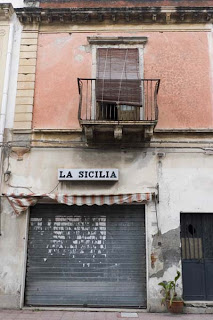 Today we took an excursion up Europe's largest volcano (and one of its most active), Mount Etna. This dangerous beast dominates all views in South-eastern Sicily, and its frequent eruptions have repeatedly had devastating effects on the surrounding towns throughout history – we had our fingers crossed that today wouldn't be the day for its next display of power.

As we left Giardini Naxos (where the tender comes into for Taormina), Etna was covered in cloud like it didn't want to reveal its awesome size to us too quickly, but as we climbed up the winding roads, we emerged above the layer of mist, and we could see its summit smoking away malevolently in the distance.

Halfway up the slope, we reached the little town of Zafferana – this place was almost swallowed up by a lava flow in the 1990s, but was saved from destruction by some clever use of concrete blocks and explosives, to channel the flow away from the town. Just above town, you could see where the lava flow eventually stopped, in the back garden of someone's house, just yards away from devouring the entire property.

The pretty autumnal colours of the vineyards, citrus groves and forests, then gave way to a bleak lunar landscape of black, grey and red lava flows as the coach carried on up to the highest point you can drive to, the Crater Silvestri, 6,000 feet up. Silvestri, is a mini-cone at the bottom of the cable car, that takes intrepid skiers even further up the volcano, nearer its 11,000 feet summit.

It was an odd feeling to walk around the crater like it was just another tourist attraction, rather than a life-threatening experience, but the fresh alpine air, and the inspiring views above the clouds and across the island, banished all thoughts of impending doom.

In fact, our guide tried to reassure us by telling us that no-one had ever been killed by Etna's lava flow, because it always moves very slowly, so you should have time to get away – but she did also tell us later that people have been killed by "lava bombs", huge rocks blown out of the volcano in its periodic explosions.

At the end of our trip, we did a walk along the coast in Giardini Naxos – this is a fairly pretty beach resort which gets busy in the summer, but turns into a ghost town at this time of year. Our goal was to get to the train station, which features in The Godfather III, (we watched The Godfather I last night), but our hunger pangs meant we gave up before we got there – maybe next time.