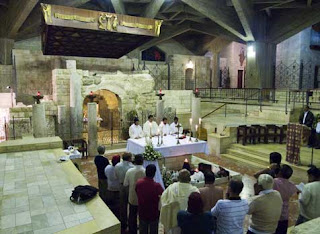 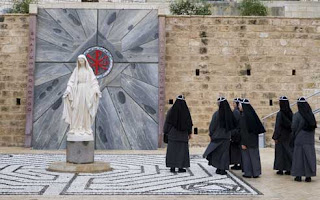 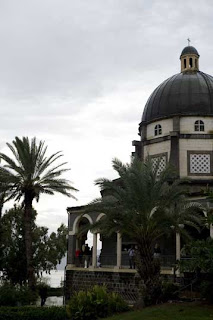 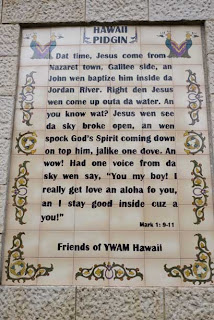 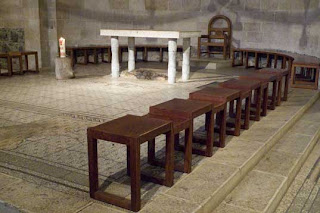 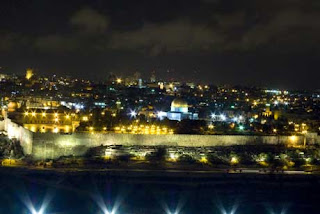 As we left the port of Haifa for our epic 2 day journey around Israel, we were caught in a huge downpour of Biblical proportions – the first of many. Our guide told us that it had scarcely rained for 5 months, so this was much needed, but it was raining so hard that animals were lining up two by two, waiting for someone to build them an arc.

We drove first to Nazareth, which these days is a fairly scruffy town, with a large Arab population. We came to visit the modern Church of the Annunciation, the largest church in the Middle East, built on the spot that the Angel Gabriel appeared to the Virgin Mary. The huge church dominates the Arab town which radiates around it, although a sign has been put up outside it to greet the pilgrims, telling them that all those who haven't embraced Islam, are "losers".

The rain miraculously held off for our visit to the River Jordan, at the spot where John the Baptist reputedly baptised Jesus. We felt you couldn't come here without dipping your feet in, so we rolled up our trouser legs and waded in.

From here, we drove up to Jerusalem to get to our hotel for a short break and a meal. But there was no rest for the wicked, as we were whisked up to the Mount of Olive for a view over Jersualem's rainswept cityscape, with the golden cupola of the muslim Dome of the Rock lit up, standing over the Wailing Wall, and competing for attention with the Church of the Holy Sepulcher – a reminder of the religious complexities of this holy city.

Finally our day ended with a visit to the fairly bizarre "Time Elevator", a cross between a rollercoaster and a museum, which attempted to recreate Jerusalem's history in a jokey Indiana Jones style – I'm not sure it really worked, but it was interesting enough.

At the end of a packed but wonderful day, we were exhausted.