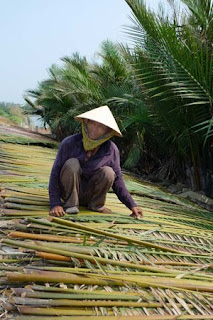 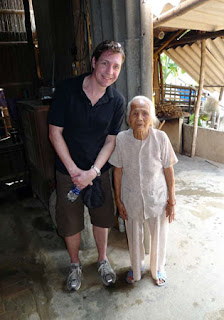 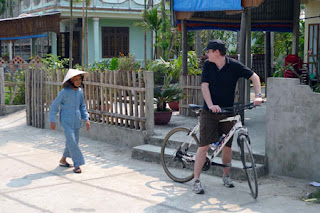 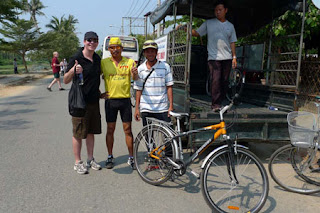 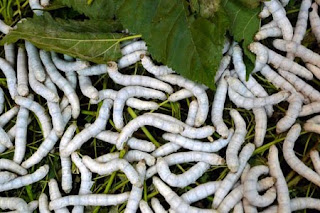 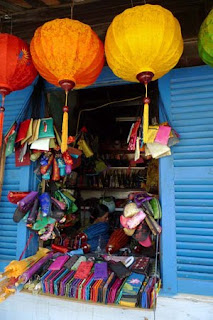 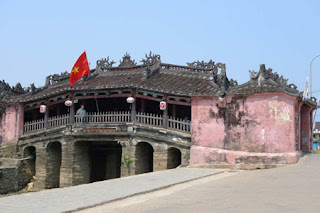 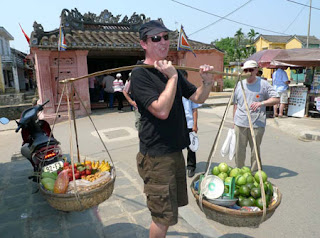 Today we got on our bikes and went on a cycling tour of the beautiful countryside outside Hoi An. We had a magical day exploring Central Vietnam's peaceful landscapes of green paddy fields and palm plantations being tended to by people in their traditional conical hats, and water buffaloes wallowing in the mud – it felt like we were seeing a picture that hasn't changed for centuries. It was great to escape the major tourist trail just for a little while, in our slow moving cycle convoy, and pass by little villages where the children would run out to say hello, and we'd shout back a badly pronounced "xin chao".

We went on a visit to a typical farmer's house – I always feel a little bit uneasy, as you trail around someone's home, but he seemed very proud to show us round, and he was getting a bit of cash too for his troubles. I had a "conversation" with the tiny, wrinkled old grandmother in her pyjamas, mainly consisting of me repeating "xin chao" again and again, and her gabbling away unintelligibly – probably something along the lines of, "have you caught the sun, or is your face always that red?". I left with the thought that this friendly little woman must have seen some amazing changes to her country in her lifetime – French Colonisation, Japanese Invasion, War with the Japanese, War With the French, War With the North, Communism, War With Cambodia, Capitalism, and now Tourism.

We cycled around for just over an hour, then made it into Hoi An to have a look around. Hoi An is full of 17th and 18th century old shophouses, temples and Chinese Assembly Halls, and is probably the best preserved town in the country, because it managed to avoid any damage in either the French or the American Wars. It's a centre of the clothes making industry, and many of the passengers took the opportunity to get some made-to-measure clothes made up – as we were overweight on our luggage coming out, we're trying to lose clothes rather than buy them, so we resisted temptation.

As we were walking through town, we passed a lady selling fruit, carrying the typical "weighing scale" baskets suspended from a stick and carried on her shoulder. We asked her if I could have a try carrying it – in spite of my many visits to the gym onboard, I found it uncomfortably heavy. After about 10 seconds, it was really digging into my shoulder and I had to put it down, feeling like a real weakling. She was about half the size of me, and walked around with it nonchalantly, like it was nothing – I think my fruit selling career has ended pretty quickly.

After these exertions, we went to a local restaurant and had a delicious multi-course lunch – any calories burned off on the cycle ride, were quickly put back with interest, as we gorged on the local specialities. Needless to say, we snoozed all the way back to the ship on the coach.