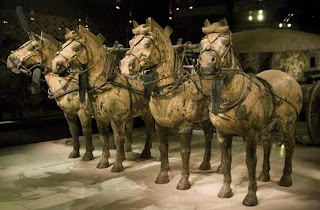 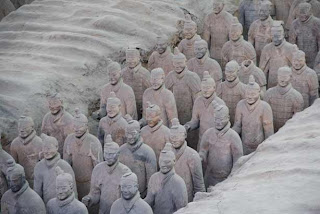 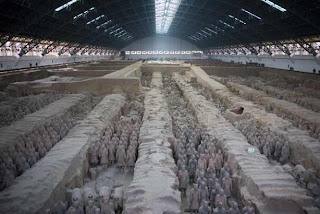 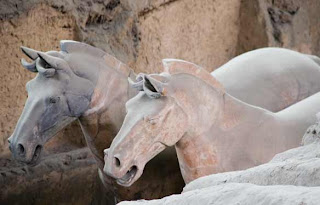 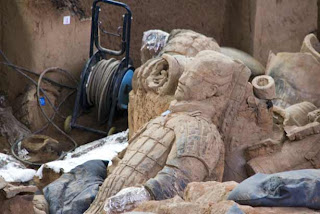 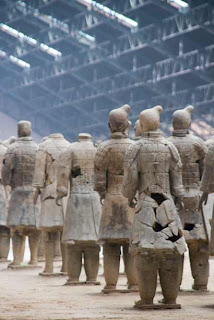 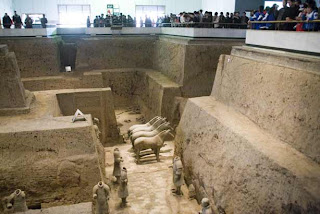 After another night in a luxurious hotel, Tracy was heading off for the highlight of her trip - the Terracotta Warriors. They're situated about 45 minutes out of Xi'an in the countryside surrounding the city. It was here, in 1974, that a farmer discovered the statues whilst digging for a well.

2,000 years ago, the warriors were all buried in large pits, lined up as if ready to go to battle, in order to protect the Emperor Qin Shi Huang in his afterlife. However, after the Emperor's death his enemies entered the pits and smashed to pieces every single warrior. This means that today's archaeolgists have the unenviable task of piecing the hundreds of thousands of fragments together. So far, they've unearthed and re-constructed almost 2,000 of the estimated 8,000 warriors.

The task of putting one soldier back together takes two archaeologists one year of incredibly painstaking work, so we weren't surprised when we were told by the guide that the expected timescale to uncover all statues and piece them together would be another 100 years! It's incredible to think how fast a skyscraper can go up in Shanghai, but how slow this task of reconstructing one of China's most incredible sights is.

The amazement of the site lingered with us as we made our trip back to the hotel in Xi'an, passing through the city and the incredible amount of smog. It's difficult to believe how polluted the city is, but you could barely see clearly past 50 metres - the guide was reluctant to talk about it but did admit there were a huge amount of asthmatics in town.

This was the last night of freedom for Tracy before rejoining Jon on the ship in Shanghai tomorrow, so she went wild, and after swimming in the hotel pool with her own personal life guard watching her every stroke, she sampled each and every nation's food at the international buffet before retiring, ready for the big reunion in Shanghai.