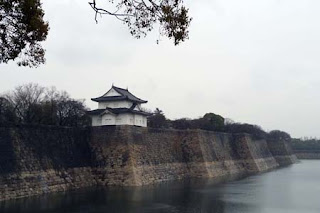 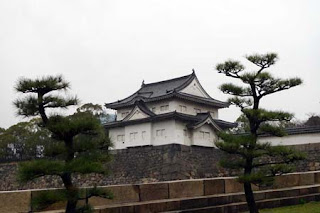 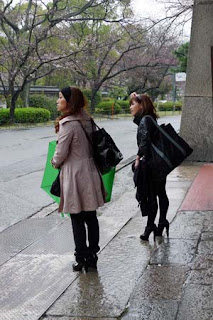 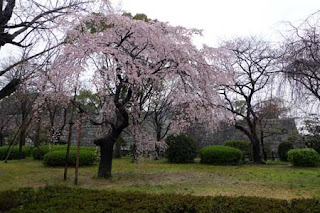 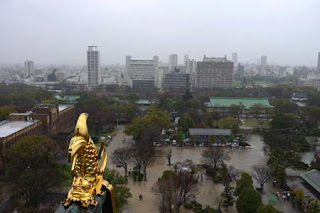 Yet more rain and cold weather today meant that we didn't get off to the earliest of starts. This wintry weather has set us into a lazy hibernation, where all we want to do is eat sweets and lie around.

However, we shook ourselves out of our torpor, and ignored the rain for a day of exploring Osaka. Our main destination was the impressive Osaka Castle, a massive provincial stronghold that was built in the 16th century, when Japan was being unified under Shogun rule. The castle might look very historical, but it was rebuilt out of iron and concrete in the 1930s after a fire, and then rebuilt again after bomb damage during the war. The huge walls and moat surrounding the castle are original, and the huge size of the stones, some weighing in at over 100 tons, shows that this place was built to last.

Unfortunately, the now-bucketing rain meant that the views from the top of the castle, over Osaka's modern skyline, weren't as impressive as usual, and the cherry trees that surround the castle looked about a week away from bursting into blossom – so, apologies that the pictures from today aren't as beautiful as they could have been.

On the train into Osaka, we were approached by an old man who wanted to personally welcome us to his city, and who offered to show us all the way to the castle. This is typical of the kindness and generosity that we receive from strangers in Japan – when our cash card wouldn't work in an ATM later that day, a young guy in the 7/11 personally converted $10 into yen, just to help us out. It's the kind of attitude that makes you pledge to be more helpful to strangers in the future.