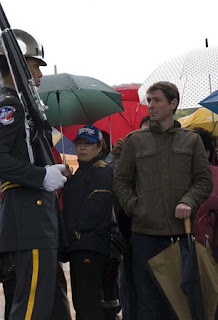 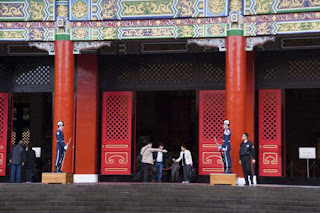 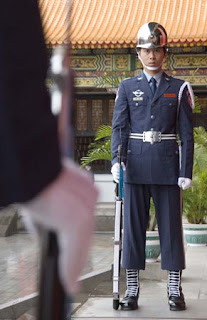 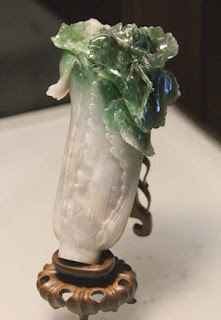 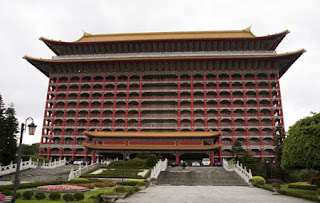 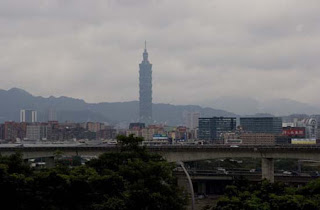 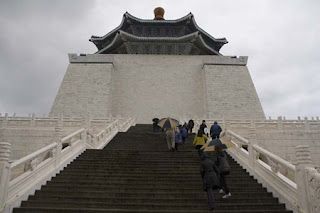 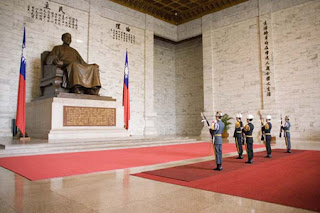 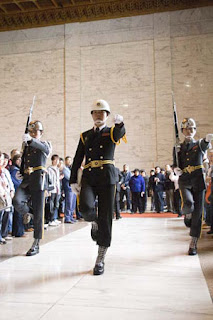 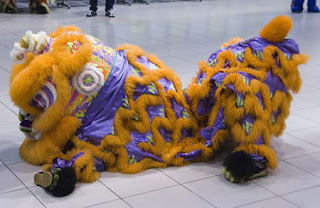 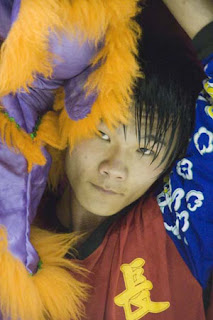 After a fairly rough day at sea, we were pretty glad to see dry land (well not that dry – it was raining heavily), at the port of Keelung, about 25 miles from Taipei, Taiwan's capital. In my lecture yesterday, I'd tried to explain Taiwan's confusing diplomatic status – it's official name is The Republic of China (as opposed to the People's Republic of China, which is mainland China), but it's not recognised as a country by the UN or by most Western countries, in spite of it having pretty much all the institutions of a state. Mainland China currently has 100 missiles pointing at Taiwan, and has promised to invade if ever Taiwan dares to declare independence, while the US has a law dictating that it will come to Taiwan's defence if ever China makes a move on it.

In spite of the tension surrounding the country on a diplomatic level, it's a vibrant and interesting place to discover. The coach took us about an hour to get into Taipei, and we went straight to the Martyr's Shrine, which is a memorial to all those who died in the name of the Republic of China, fighting in the many battles of the Chinese Civil War against the Communists – a war that the Nationalists eventually lost, and caused them to flee to Taiwan, to set up "Free China", here on the island.

Next we went to the excellent National Palace Museum, which houses the enormous Imperial collection from the Forbidden City, that was taken from Beijing before the Communist take-over of the mainland in 1949. Many people put this museum in the Top 4 museums in the world, after the British Museum, the Louvre, and New York's Metropolitan; and it houses a fabulous collection of opulent Chinese treasures. Our guide took us to see what she called "the Museum's Mona Lisa", a perfectly carved Jade Cabbage – it doesn't sound impressive, but when you see the delicate craftsmanship, it is pretty amazing. There's over 650,000 exhibits in the museum, but the highlights for us, were some amazing ivory carvings – the intricacy of the carving was astounding.

After negotiating the busy crowds for 2 hours in the museum, we were ready for lunch. We went to Taipei's most famous hotel, the beautiful Grand Hotel, housed in a fabulously decorated building, for a delicious buffet lunch. Next we went to the imposing tomb of Taiwan's founding father, Chiang Kai Shek. As the man who set up the country (governing from 1949 until his death in 1975), and oversaw Taiwan's remarkable economic growth, CKS (as he's known) occupies a difficult position for many modern Taiwanese, because he was also a military dictator, whose regime carried out a number of human rights abuses during the period of martial law.

That he was the subject of a personality cult, is obvious from the massive size of his Memorial building, and from the sheer size of his seated statue, which beams down on his people with a beneficent grin. Every hour, there's a changing of the guard, in which the deadly serious looking soldiers march slow motion from their posts, and stamp their feet and bang their rifles on the floor loudly in a perfectly choreographed ceremony, before an impressive show of rifle twirling, like the scene from the start of A Few Good Men.

Before we left Taipei, we had a quick stop at the foot of the city's most famous landmark, the towering Taipei 101 Building, which at 101 stories tall, was formerly the tallest building in the world, until the ridiculously tall, 160 storey Burj Dubai stole the title.

The gloss was only slightly taken off an excellent day, when we got back on board and the captain informed us that we were heading into very heavy seas, and should take our sea sickness pills. As someone who normally doesn't handle this very well, strangely enough it hasn't really affected me so far. Famous last words……