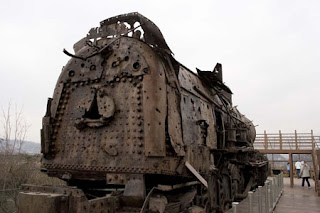 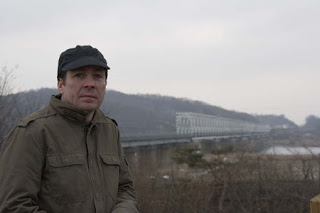 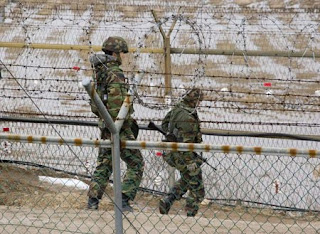 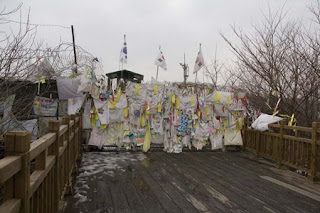 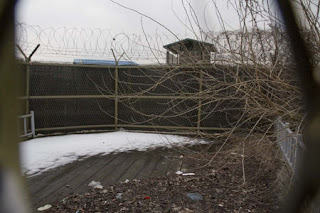 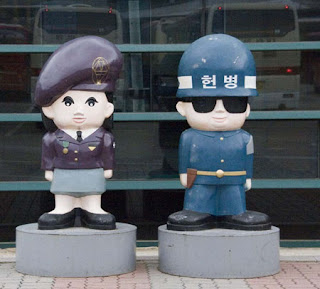 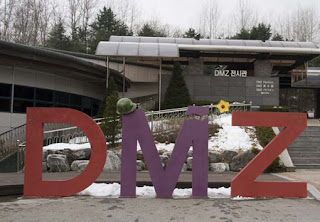 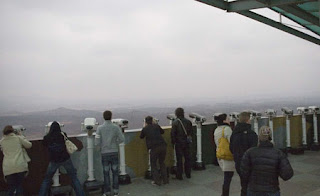 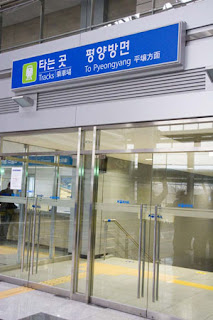 Today we visited one of the world's most volatile security hotspots, to the menacing Demilitarised Zone between North and South Korea – the most heavily fortified border in the world. Here the two antagonistic halves of Korea are separated by a 2.5 mile wide Demilitarised Zone, that runs for 150 miles along the entire length of the border, from coast-to-coast. As we drove north to the border, even the river banks that were still within South Korea, were lined with huge amounts of barbed wire and watch towers, just in case any North Korean attack force decides to sail down river.

Our first stop was to where the river forms the border between the two warring cousins, and here we went to the South Korean end of the so-called Freedom Bridge, the bridge where captured soldiers were exchanged at the end of the war in 1953. Since then, no-one has crossed the bridge, apart from in 2000, when it looked like North and South might resume more friendly relations. In the last few years, North Korea's own Dr Evil, the dictator Kim Jong Il, has done his best to scupper any chances of Reunification, or even normalized relations, by attempting to become a nuclear tower.

Next we passed into the DMZ itself, where our coach was boarded by a soldier who checked out that we weren't North Korean insurgents – for a supposedly "Demilitarised" place, I've never seen so many soldiers. Ironically enough, the countryside that forms the DMZ is actually one of the most unspoilt countryside in the world, scarcely touched by human kind for the last 50 years – not surprising since it's lined with over 10 million mines. If ever North and South are unified, it will be interesting to see what happens to this unique ecosystem.

From the border, we went to possibly the most bizarre element of the DMZ, to visit the underground tunnels that were dug under the border by the North Koreans, so that they could invade the South. We went to the Third Tunnel (which was discovered in 1974), and we put on our yellow hard hats and descended into the depths of the Cold War, to walk around this bizarre relic of the struggle between Communism and Capitalism.

The tunnel stretched a mile into the South before it was discovered and blocked off by the South Korean army – the North first denied all knowledge of it, saying that it had been dug from the South, and then they said that they had merely been digging for coal. They had even painted the walls of the tunnel black, to back up their childish excuse, overlooking the fact that the tunnel had been chiseled out of granite, and there's not a lump of coal to be found in the whole surrounding area.

We then went to an observation post on a hill above the border, to stare directly into the face of the Axis of Evil. The weather was freezing and the wind was biting, which contributed to the grim atmosphere of this menacing place. You're only able to take photos behind a yellow line a few yards back from the observation post itself, so I can't show you a picture of the World's Biggest Flag, which flies on the Northern side of the border, across from probably the World's Second Biggest Flag, on the Southern side of the border. The North Korean flag weighs in at 650 pounds, and is so heavy that it'll only fly in a Force 8 gale – it was flying pretty well today!

Our final stop was at a gleaming new train station that has been built on the Southern side of the border – ready for when (and if, a big IF) Korea is re-united. It was strange to see the signs directing you to the platform for Pyongyang (North Korea's capital), when the chance of a train actually running there seems an impossibility unless there are some major changes in the world.

A fascinating, but slightly depressing day.