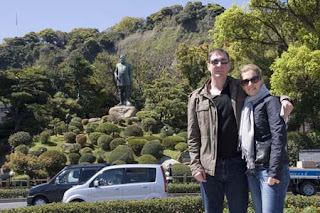 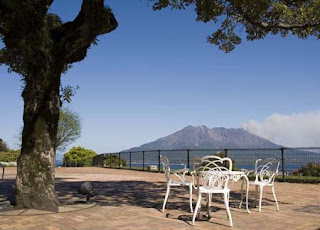 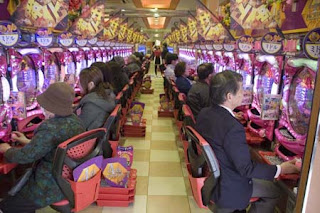 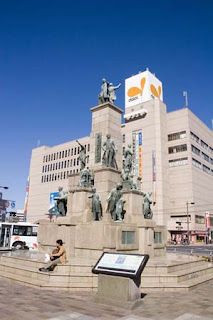 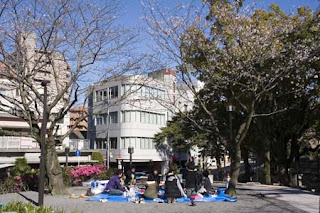 As the countdown to Tracy's birthday continues, the sun finally came out – and we had a glorious sunny day in Kagoshima. As we sailed towards this city in the South West of Japan, you could immediately see why Kagoshima is known as "The Naples of The East" – no, it's not full of rotting rubbish, or with suicidal scooter drivers riding 3 to a bike – it sits in a wide bay, dominated by a malevolent looking volcano. The volcano, Mount Sakurajima, isn't actually as dangerous as Mount Vesuvius, because it lets off steam on a regular basis, and doesn't save up its power for big explosions. It was smoking away all day today, and in the mid-afternoon it did a major spew of ash and smoke, which covered a group of passengers on the tour to the volcano.

We decided to get the best view over the city and the volcano, by climbing the hill behind the city, up the 107 meter high, Shiroyama Park. This hill was the scene of the epic battle that the film "The Last Samurai" was (very loosely) based on. In 1877, Kagoshima was the home to a major rebellion against the Emperor, and the forces of modernisation that were sweeping Japan, which had seen the Samurai outlawed. When Hollywood got hold of the story, they added in the Tom Cruise character (there weren't any westerners involved in the Satsuma Rebellion as its known), they turned the Japanese hero from the dumpy and grumpy looking Saigo Takamori (see statue) into the handsome Katsumoto, and they took more liberties with the history than the even the best Destination Lecturer – but in spite of all this, the film is actually quite liked in Japan.

After this exercise, we wandered around town, and along the river – it's a mostly modern place, but it has lots of parks, wide boulevards and monuments everywhere, to keep you interested for the day. As we explored, we wandered into the sensory overload that is a Pachinko arcade – a bizarre cross between a Las Vegas casino, and the amusement arcades on Skegness seafront. Even though it was a bright, sunny day outside, hundreds of people were gathered in this incredibly noisy neon-lit hell, sitting mindlessly in front of their flashing and clanking Pachinko machines, watching little ball bearings cascade down the screens. It's difficult to describe, difficult to understand, and difficult to stay in there for very long, but it must have a hypnotic brainwashing effect on the players, who spend hours there, pumping money into the machines, transfixed by it all. Bizarre.