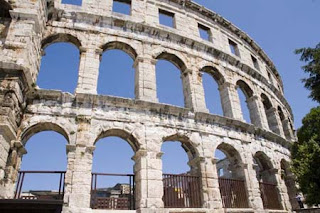 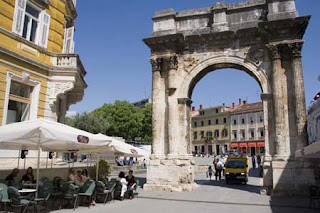 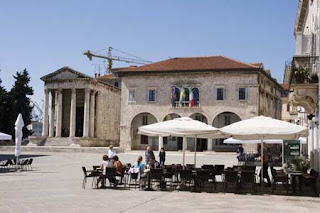 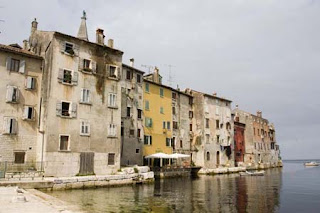 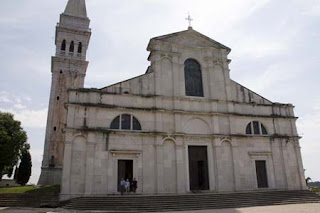 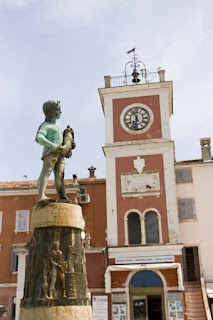 Today we visited Croatia's beautiful Istrian Peninsula, an area with lots of Roman, Venetian and Italian heritage – in fact, to many Italians whose families left (or were forced to leave) at the end of the Second World War when the area was turned over to Yugoslavia, this should still be part of Italy.

In the morning, we did a tour to the beautiful little Venetian town of Rovinj, my favourite town in Croatia - a kind of "mini Dubrovnik", sitting out on a peninsula in the Adriatic. As you explore its maze of medieval backstreets, its baroque churches, and its monuments bearing the Winged Lion of St Mark (the symbol of Venice), this place couldn't really seem any more Italian. However, these days it's firmly Croatian, and they at least seem to be doing a good job in preserving the historic atmosphere of the place.

In the afternoon, we explored our port of call, Pula (Pola, back in Italian times). Here the most obvious Italian heritage was over 2,000 years old, dating from the times when this was an important outpost of the Roman Empire. The incredibly well-preserved amphitheatre here is the sixth largest in the world, and looks like a smaller version of Rome's coliseum with its three rows of arches and columns; while there's also an impressive triumphal arch, a stretch of solid Roman walls, and a Roman temple, all sitting in the middle of a busy modern town.