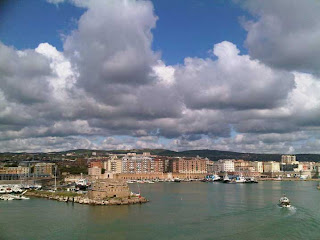 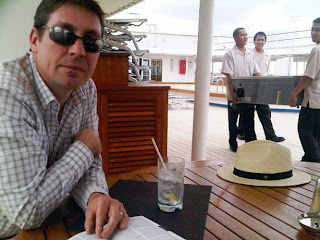 After a month in the UK, we're excited to be off cruising again – this time, off to Rome (Civitavecchia), for a 16 day cruise around the Mediterranean, Adriatic and Aegean.

At Heathrow, after a crack of dawn start, I could scarcely believe my bleary eyes as I looked out across the runway at our Al Italia plane to see three men in handcuffs being led on board by a group of burly policemen. When we got onboard, there they were sitting shiftily, still handcuffed, occupying the back three rows of the plane, with 2 escorts sitting either side of them.

As thoughts of hijacking and convict-inspired mayhem raced through our over-imaginative minds, we kept a close eye on our criminal friends whose knees were jogging up and down nervously, as they anticipated whatever fate was to befall them in Italy. In fact, disappointingly there were no incidents to report, but it was quite a surprise that once we'd arrived in Rome, and caught the transfer bus from the plane to the terminal, they were also put on the same bus as the passengers, and were standing right next to us, as we crammed onto the bus!

Anyway, having survived this brush with Con Air, we got the transfer to Civitavecchia, and settled back into the life of luxury that is cruising.