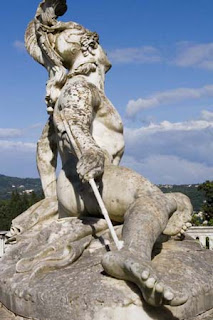 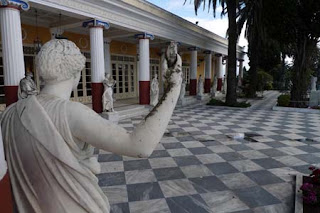 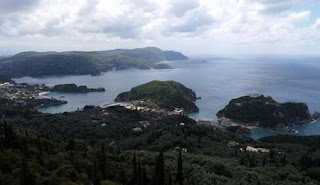 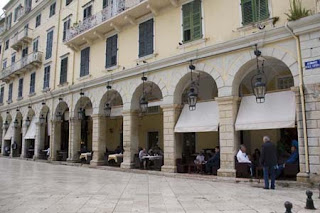 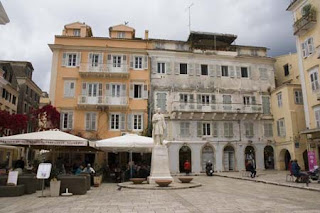 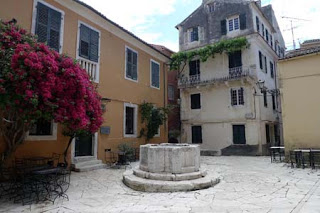 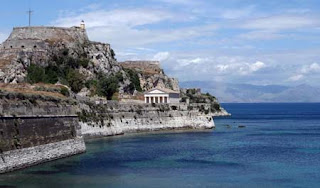 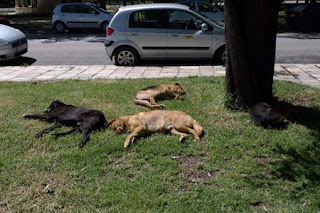 Corfu is the one of the greenest and wettest of all the Greek islands, so I suppose we shouldn't have been too surprised when the heavens opened in the middle of our tour of the island, sending us scurrying back to the coach.

Before the rain came, we went to the Achilleon Palace, just outside Corfu Town – a neo-classical palace built by the tragic Austrian Empress Sisi. Depending on your viewpoint, she was either a high maintenance, self-obsessed neurotic depressive with an eating disorder; or she was one of the most beautiful women in the world (she had a 16 inch waist – not that that made her beautiful of course), who lived a tragic life in a loveless marriage, shunned by the establishment figures of the Royal Family. The similarities with Princess Diana are almost too obvious to point out.

Anyway, the Palace she built here in Corfu is certainly very impressive. The attempts at recreating ancient architecture and sculpture are a little too heavy handed for some, but I quite liked it – the only downside was that about 5 coach parties all descended on the palace at once, and the place got overrun.

So, we escaped the tourist hordes, and went into the hills to visit the monastery at Paleokastitsa, which is when the torrential rain hit, and I began to regret my decision not to bring a coat or umbrella.

Fortunately, our next stop was at a hilltop restaurant, where we had some delicious typical Greek food and wine, and once the sun had come out again, we could enjoy the beautiful views over the turquoise coast below us.

Our final stop was in Corfu Town, where we had a chance to see all the different architectural styles of the various occupiers of the island. The people who had the biggest influence on Corfu were the Venetians, who occupied the island for over 400 years, and their imprint is all over town – from imposing grey stone castles, to streets and piazzas that wouldn't look out of place in Italy. This "un-Greek" atmosphere was added to by the French who followed them, who built the arcaded set piece of the Liston – clearly inspired by the architecture of Paris.

The British were the next to arrive, and they left behind Regency neo-classical palaces, and of course, Britain's greatest contribution to civilisation, the game of cricket – Corfu Town's cricket pitch was looking a bit moth-eaten, but they do still play cricket here during the summer.