May 6th – Walking Over Lemons in Sorrento 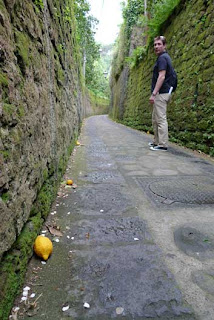 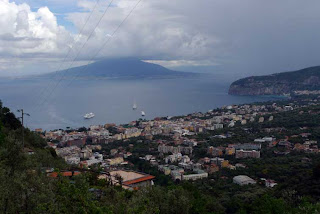 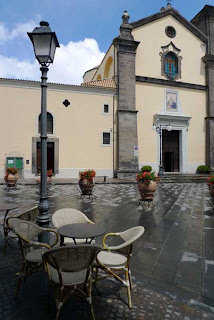 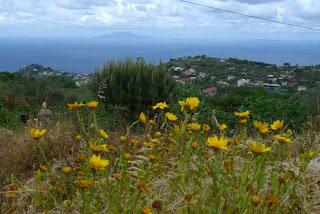 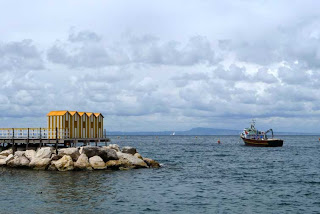 Today in Sorrento, we experienced four seasons in one day, as the weather couldn't make its mind up at all – we had torrential rain, bright sunshine, and strong winds, alternating about every 30 minutes.

We decided that we would do a trek up the hill from Sorrento to Sant'Agatha Sui Due Golfi, a little village about 5 miles from Sorrento, and more relevantly, about 400 feet above the town. It was a steep trek up the pathway from Sorrento, but as we climbed through the fragrant lemon and olive groves, the views just got better and better, as we could see across the Gulf of Naples, over to the bulk of Vesuvius in the distance.

Unfortunately, just as we were congratulating ourselves on choosing the perfect day's activity, some nasty black clouds blew in and the heavens opened. This transformed a steep, but manageable path, into a slippery luge run, so our ascent slowed down considerably, as we crabbed sideways up the loose shingle paths.

However, after much puffing and panting, we finally made it up to Sant'Agata – a picturesque little town, which enjoys spectacular views across both the Gulf of Naples and the twinkling Gulf of Salerno on the other side of the peninsula (hence the name, "sui due Golfi"). After a well deserved drink in a café, we then had to contemplate our descent down the slippery hill. As this was likely to be even more treacherous than the way up, we chose the lazy route, and got the bus down. As it turned out, the bus journey felt even more hair-raising than the walk, because the roads down are incredibly winding and it seemed to travel twice the distance that we walked up, as we were thrown around the back of the bus all the way down to Sorrento.

With more rain about to hit, we took the tender back to the ship.