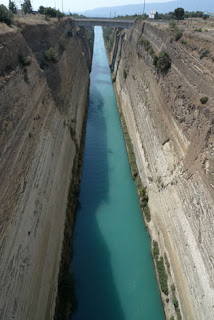 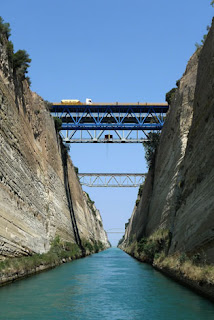 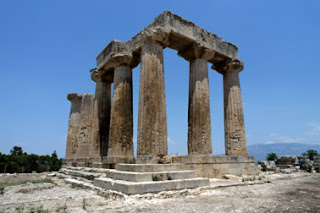 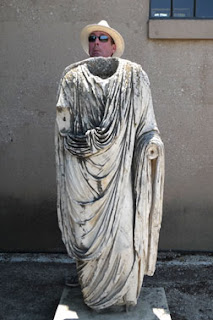 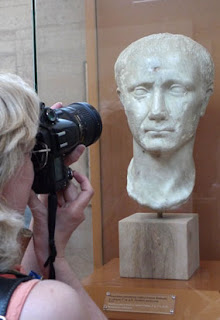 Today we joined a tour to visit the Corinth Canal and Ancient Corinth. In the last few years I must have become a Canal Geek, because I was actually quite excited to add this canal to my list of major canals traversed, to join the Suez, Panama, and Kiel Canals. Whilst the Corinth Canal isn't on the same scale of engineering as any of those three, because it's only 6km long and not broad enough to take ships over 14 meters wide, it's definitely one of the most spectacular to look at, carving it's way through sheer cliffs either side, as it cuts through the narrow isthmus of land that joins the Pelopponese to mainland Greece.

In 1893 when it was built, to link the Aegean Sea to the Ionian Sea, they must have thought that the canal would have been big enough to cope with most ships, but the size of modern shipping has left the canal behind, so nowadays most of the traffic that passes through are just yachts and pleasure craft.

First we went to the bridge that crosses over the man-made gorge below, for some vertigo-inducing views over the canal, and then we got on a boat, to travel up and down the canal. On a beautiful sunny day, the contrast between the milky, turquoise waters of the canal, with the deep blue waters of the seas at either end, was really striking.

After our canal criss-crossing, we then went onto to visit the site of Ancient Corinth – one of St Paul's favourite addresses for correspondence. Back in Ancient Greek times, this was one of the most important city states, and then it became a major Roman city as well, when St Paul was a frequent visitor. Unfortunately, a series of earthquakes reduced much of the city to rubble and it was abandoned, and the archaeological digs are ongoing. Even if it's a bit difficult to picture how impressive this place would have looked back then, the size of the site and the few bits that have been pieced together all hint at a magnificent ancient city.

After three weeks of lazing around, it's good to get back into sightseeing mode again.