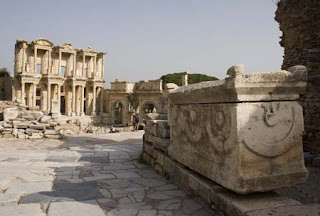 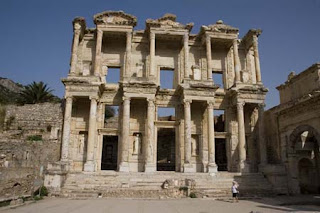 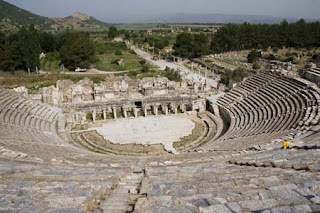 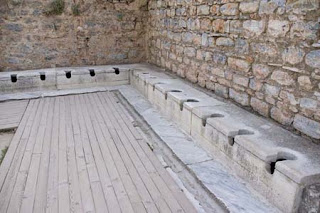 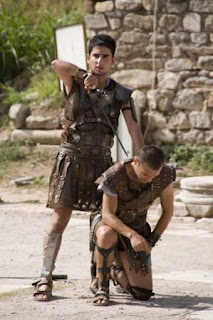 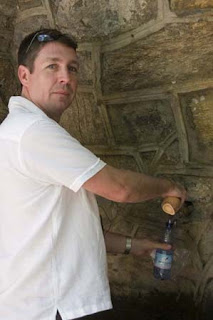 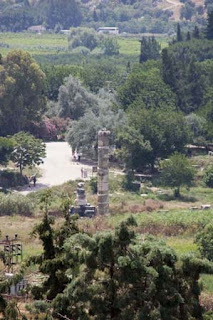 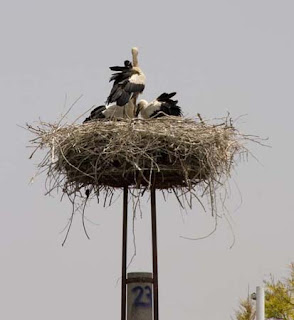 Unbelievably, it was 31 degrees when we left the ship at 7.15am for our tour of "Biblical Ephesus", and the day just got hotter and hotter. However, we were thankful for the early start, because at least we got to Ephesus before it got completely boiling; and, as the first people to pass through the gates, we were able to enjoy the site before it got overrun with tourists (we drove past the site later at 12ish, and not only was it 43 degrees by then, but there were loads of groups vying for the few bits of shade).

So, for the first time ever, we were able to take our photos of the magnificent Roman ruins with scarcely a tourist in sight to ruin the view. As you walk around the colonnaded streets, lined with marble, and see the grand temples,fountains and even public lavatories of what was the 4th largest city in the Roman Empire, it's amazing to think that only 30% of this extensive site has actually been uncovered by the archaeologists – there must be so many archaeological treasures underneath the fields that surround it.

But, what makes visiting Ephesus so interesting, isn't just the Roman side of things – this was also the site of many of the Acts of the Apostles. St Paul regularly preached in the huge theatre here (as well as writing his letters to the Ephesians), and St John and the Virgin Mary also spent the last years of their lives here.

Our tour took us to the House of the Virgin Mary – reputedly, the place where she lived and died – and we went to a Mass in the convent next door (the mass was said by one of the only two Catholic Turkish priests). Finally, we filled up our water bottles with holy water from the miraculous spring next to the house, hoping that some divine inspiration might turn me into an orator of St Paul's proportions.

By now it was getting truly roasting, so we were glad it was time for lunch, and we went up into the hills to a lovely remote restaurant, for what we billed as a "Biblical Lunch". Supposedly, the food was prepared using methods and ingredients employed during Christ's time, although we were just keen to know that we'd get more than five loaves and two fish, and if they'd turned the water into wine. Fortunately there was wine (and water), so we feasted on food that didn't seem too different from your standard Turkish fare, although I wasn't able to tell if there was enough to fill 12 baskets at the end of it all.

The food and the heat meant that we scarcely had the energy to see the ruins of St John's Basilica – once one of the largest churches in Christendom, before an earthquake struck. The church was built over the site of St John's grave, and was constructed out of stones taken from the ruins of the Temple of Artemis, one of the Seven Wonders of the World (this ancient wonder consists of one sad-looking column sitting forlornly in a field). At the end of being oven cooked in the Basilica, for once I didn't mind getting taken to one of the ubiquitous Turkish Carpet shops, because at least they had air conditioning.