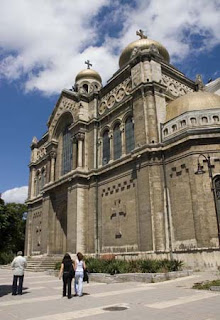 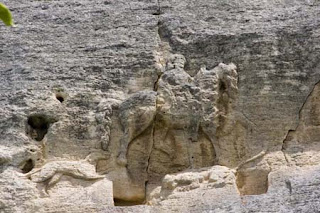 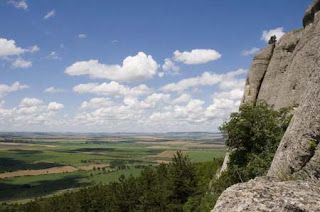 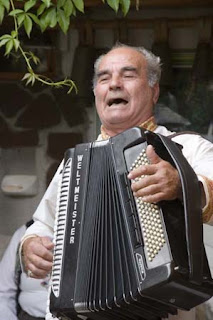 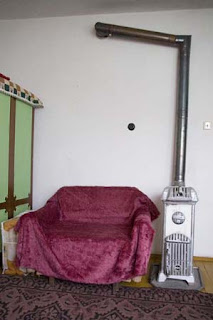 From Varna in the Black Sea we travelled into the Bulgarian countryside to visit the symbol of Bulgaria and the nation's most treasured historical site, the Madara Horseman.

On the way there, our rather cynical local guide gave us his critique of where he thought Bulgaria had gone wrong in the 20 or so years since it left Communism behind. His theory was that after all those years under Soviet domination, where everyone had to do what they were told and didn't have to think for themselves, they now only thought about themselves and didn't care what effect their actions had on the rest of society. Into this social vacuum, a small super-rich and corrupt elite had accumulated enormous wealth at the expense of the rest of society, while most ordinary people struggled to improve their lot. He said he was glad that Bulgaria had now joined the EU, because "someone would now tell us what to do" – he genuinely felt that Bulgaria (or Bulgarians) couldn't be trusted to make decisions for themselves.

On our way out of Varna, we passed beautiful belle epoch architecture from the turn of the century just after the country had gained independence from the Ottomans; then rows of ugly and decaying concrete apartment blocks from Soviet times; then the gleaming shopping malls full of western brands from the last 5 years – "we have become a mall culture", our guide wearily told us.

The traffic in Varna was pretty heavy – "we take in all of Europe's second hand cars and are now just a scrapyard" - but once we got out of town the roads were delightfully empty, if a little potholed in places. As we passed by some beautiful farming countryside, our guide explained how many farms and fields are now lying idle, because after the fall of communism most of the collectivised farms were given back to the families of their original owners – however, by the 1990s, many of these farming families had been moved to the cities and were now factory workers who had no interest in farming, or had no knowledge of how to farm. It was sad to see the uncared-for lines of overgrown vineyards, standing wastefully redundant next to the well-manicured vines of a farm where someone had bothered to keep on top of things.

On reaching Madara, we made our way up to the edge of a sheer cliff face on foot, by passing through some beautiful green woodland, to reach the foot of the cliff where the Madara Horseman had been carved into the rockface, some 23 meters above us. Being about 1,300 years old, this remarkable carving of a huntsman on a horse spearing a lion, accompanied by his dog, is admittedly looking a little faint by now, but nevertheless it's quite remarkable for its detail and its age. We stood in front of the Horseman at the bottom of the cliff for about 20 minutes while the guide explained its history – as he reached the end of his explanation, one lady raised her hand and asked, "can someone tell me what we're meant to be looking at?". She'd been looking at a totally empty bit of cliff, wondering what all the fuss was about. Once we'd pointed out the right bit of cliff to her, she was relieved that this wasn't one of those magic eye puzzles where you stare for ages and still don't see it.

After the Horseman, we went to visit a local family to see how the country people live – often these house visits have a fairly contrived feel to them where you feel pretty embarrassed about the whole thing, but here it was a really charming atmosphere, and the warm welcome seemed totally genuine. They provided us with some simple but tasty snacks, and some local folk music blasted out on a screeching Bulgarian bagpipe and a more tuneful accordion. It was a really lovely time, and the best thing for me was that I got to play with a tiny 4 week old kitten and a docile puppy.