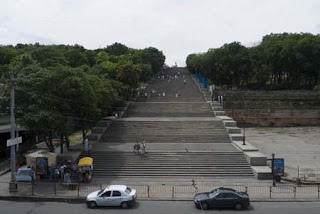 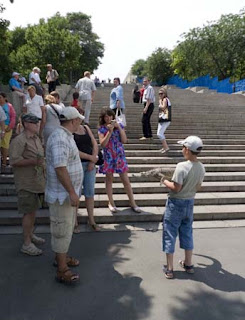 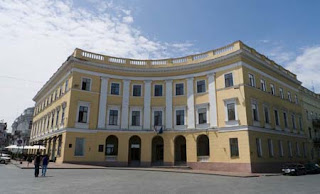 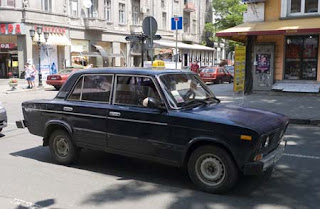 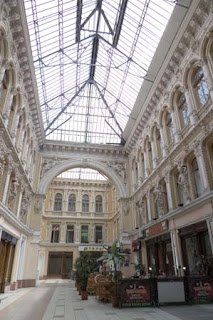 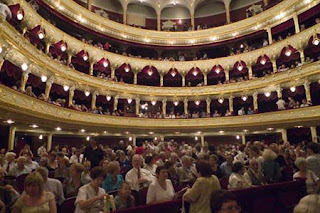 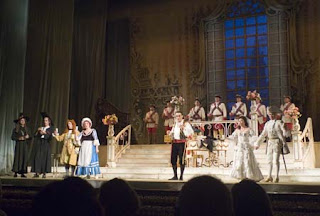 We got into Odessa at 12pm, so we rushed off the ship to explore this historic Ukrainian town. The ship docks really close to town, so we walked to the bottom of the famous Potemkin Steps, Odessa's most famous architectural setpiece, a monumental staircase of 192 steps leading up from the port into the town centre. The Potemkin Steps are most famous for the massacre that took place here in 1905, when Tsarist troops killed 2,000 protesters on the steps – a kind of Tiananmen Square Massacre that precipitated the Russian Revolution 12 years later (immortalised in Eisenstein's film, "The Battleship Potemkin".

The steps are the most touristy part of Odessa, but it was still an odd sight to see a baby crocodile with its mouth gaffer-taped up, a monkey (with mini oven gloves taped onto his hands to stop him from scratching people), and an owl, all being touted around for ignorant tourists to pose for photos.

Odessa was built from scratch in the early 19th century, as a kind of St Petersburg by the Black Sea, so it's full of grand baroque and neo-classical buildings in various states of (dis)repair. But as we soaked up the historic atmosphere on the elegant city centre, you couldn't help but notice how many very attractive young women there were walking the streets. The only thing that kept Tracy from slitting her wrists at the quality of the competition, was that most of them were dressed in some of the worst fashions I've seen outside of Skegness on a Saturday night. I've never seen so many tight-fitting dresses, mini-skirts, push-up bras and nylon in my life – it's like there wasn't enough nylon in the Ukraine to go round, so everyone was rationed into wearing as little as possible.

In the evening, I watched the first half of the England match, and then dragged myself away to go to the Opera to watch "The Barber of Seville". Typically, having sat through 2 dire England performance, we were actually playing well this time, but how many chances to you have to watch an opera in one of the most grand and ornate opera houses in Europe? Odessa's baroque opera house is dripping with gold gilt and fat little cherubs, and it was a wonderful setting for a really entertaining performance (even though the plot was so incomprehensible that one couple thought the whole thing had finished after Act Two and were ready to go, with the final plot-resolving Act still to go).

To make a wonderful evening even better, we learnt that England had won and are through to the next round!