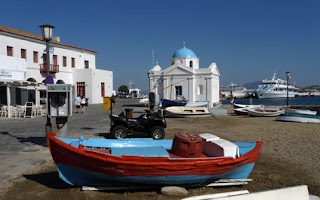 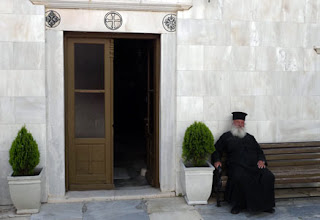 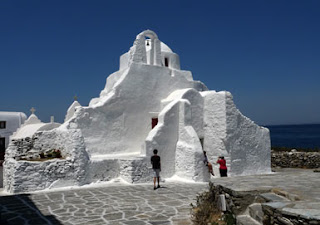 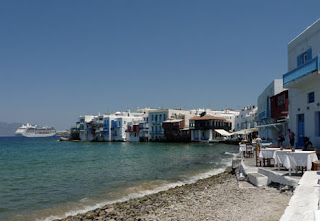 Woke up this morning hoping that the England v USA match was a nightmare. I spent the whole match trying not to get too loud, seeing as I was watching it with a crowd of Americans - not an easy task when I saw the England goalkeeper ruin the match for us.

Today, I got out of Mykonos Town, and went on a tour that explored the interior of the island and some of its gorgeous coastline. Even by early June, the whole island has a parched look to it, and the beaches are beginning to fill up with hungover tourists, as they sleep off the excesses of the night before.

We visited the bay where some of Shirley Valentine was filmed (it used to be a secluded spot of just a few houses – now there's 2 five star hotels and lots of development), and then we visited the monastery at Ano Mera. Apparently, the youngest monk here is 70 years old, and there's no new monks coming through in the system, so this monastery might go through the same fate as one of the island's other 2 monasteries, which had to be shut down five years ago when the last of the old monks died.
To round things off, we went to a local taverna for mezedes and ouzo (at 11 in the morning!).

Actually, I resisted the temptation to down an ouzo, because I am having a week of temperance – seeing as this is our first time on the ship since they started serving complimentary wine, my timing for a booze-free week couldn't be any worse.