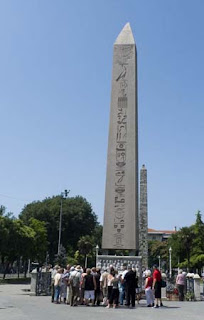 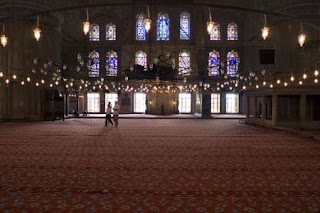 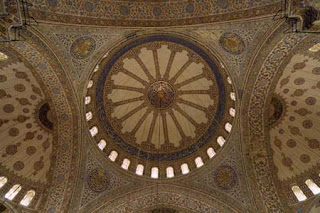 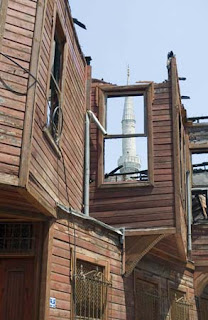 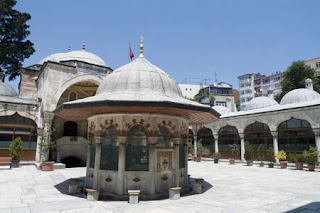 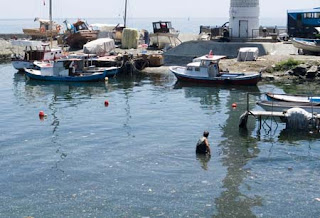 A Destination Lecturer who was on the ball would have remembered that the Aya Sofia (Istanbul's most amazing building) is closed on a Monday, so we shouldn't have left it till today to pay another visit there. So, instead, we had to settle for a trip to the Ancient Hippodrome, and to the enormous Blue Mosque that sits opposite. As we sat on the carpet in the Blue Mosque, taking in the awesome size of its dome, unfortunately the most over-riding sensation was one of a pervasive stench of cheesey feet. On another hot and sweaty day, the foot odour from the hundreds of other tourists with us who had removed their shoes was almost overpowering.

After this, we went to one of the city's oldest mosques, the exquisite Sokollu Mehmet Pasha mosque, which was built in 1571 by Sinan, Istanbul's greatest architect (the Ottomans' answer to Palladio or Michelangelo). In contrast to the Blue Mosque, we were the only visitors here, which meant we were given the full attention of the pushy caretaker, who initially appeared helpful, but quickly became annoying. He was really friendly as he tried to sell us some photos, telling us we could take our own photos, as long as we didn't use flash. Then, when we didn't buy his photos, he got really grumpy and said he'd told us we weren't allowed to take photos, and then followed us around, muttering away to himself. Fortunately, you'd be hard pressed to find two more brazen tourists than us, so we gave him big smiles and took our time, before thanking him ever so much for his welcoming attitude

To finish off our day, we went for a "quick" walk along the coast, passing the old Byzantine sea walls, back to the Golden Horn. Unfortunately, this was a lot lot further than we'd anticipated, and there were no seaside cafes to have a rest from the sun in, so it was a long hot walk back to civilisation. On the way, we were amazed to see how many people (actually men only) there were swimming in the less-than-clean-waters of the Bosphorous. This is one of the busiest stretches of water in the world, sitting alongside a city of 15 million people, so I think you'd need a strong constitution to swim in there.

Finally we made it to the Galata Bridge, where a pint of ice cold beer has never tasted so good.