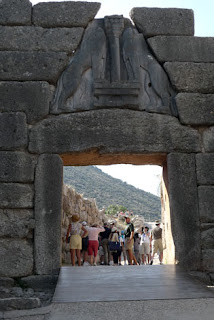 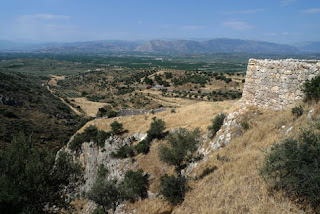 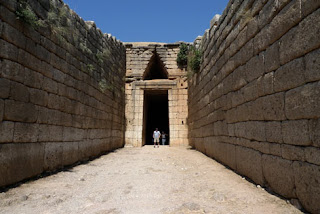 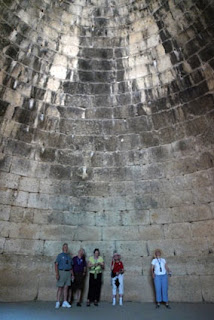 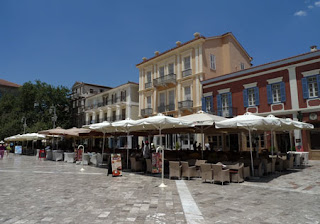 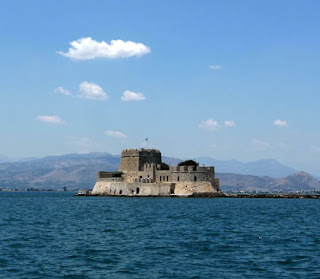 After another very early start, we travelled from Nafplion to the site of Ancient Mycenae, home to the legendary King Agamemnon, the leader of the Greeks in the Trojan War. It's hard to believe it now, given its remote location and small size, but in the 13th century BC, this was one of the world's great superpowers.

Even at nine in the morning, it was well over 30 degrees centigrade, so we shuffled around the site, dodging from one bit of shade to the next. We passed by the so-called "Cyclopean Walls" – walls consisting of such huge stones, that the ancients thought that they could only have been shifted by the legendary Cyclops, then we entered the acropolis through the famous Lion Gate, reputedly Europe's oldest monumental sculpture. Inside the city, we passed the burial grounds where the great German archaeologist Heinrich Schliemann had uncovered large amounts golden artefacts, and then we sweated our way up to the top of the Acropolis to the site of the Royal Palace, where perhaps Agamemnon and Claetamnestra got up to their legendary advert for marriage guidance counselling.

Our final stop was at the amazing "beehive" tomb, the so-called Treasury of Artreus, which was an amazing piece of Neolithic architecture – the stone over the doorway weighs over 120 tons, so how these bronze age construction workers put the whole thing together, is one of life's mysteries.

We got back to Nafplion just as the mercury was hitting 38 degrees, and we did a little exploring before our bodies could no longer take the heat, so we retreated to the onboard air-conditioning. Nafplion's a very pleasant little town – as Greece's first capital in 1828 (until Athens took over in 1834), it's got lots of impressive architecture and monuments from the time when the city had a pivotal role in Greece's independence from the Ottoman Turks.