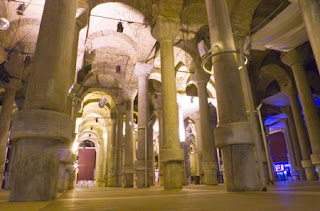 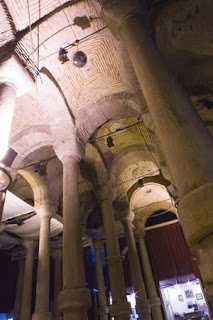 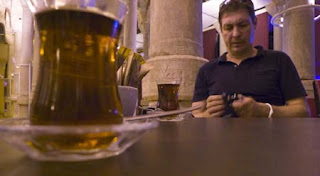 We caught the tram over to Sultanahmet, Istanbul's oldest and most interesting district. Having covered off all the main sights previously, we wanted to see something a little different today. Most tourists to Istanbul will end up in the Basilica Cistern at some point, but they probably don't know that there's lots of other Byzantine cisterns that can be visited underneath this historic city. We went to the 1,001 Cistern – Istanbul's oldest cistern (built in the 4th century by the Emperor Constantine), named after the number of marble columns that support the vaulted roof of the subterranean cistern – the fact that there are only 224 columns shows that whoever named it wasn't very good at maths.

After the fall of Constantinople, the cistern fell into disuse under the Ottomans, and it became a huge underground rubbish dump – thousands of tons of centuries-old garbage had to be removed in the 1970s, when they decided to see what was down there. There were hardly any other visitors in this dank and eerie underground cavern, and although there wasn't really much to see other than soaking up the historic subterranean atmosphere, we stayed down there for a while just to get out of the searing heat above ground.

Having cooled down nicely, we went on a walking tour of Sultanahmet, passing the huge dome of the magnificent Aya Sofya, past the soaring minarets of the Blue Mosque and through the crowded Grand Bazaar, before returning to the ship. We've loved our time in Istanbul – this is definitely one of the world's great cities.