June 28th – Hard at Work Through the Bosphorus and Dardanelles 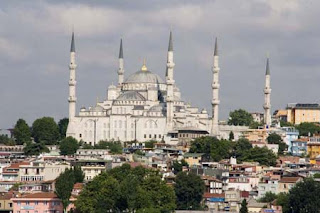 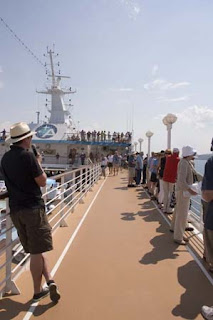 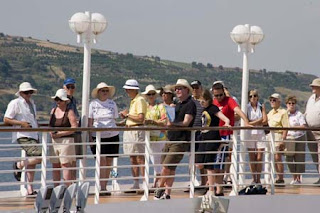 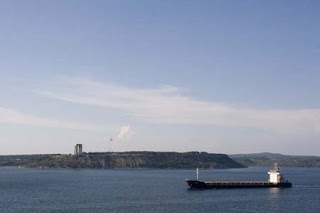 This morning, at 7.30am we were sailing through the Bosphorus– the 16 miles long narrow neck of sea that separates the Black Sea from the Sea of Marmara, that also separates Europe and Asia, and also separates the two halves of Istanbul. As a result, throughout history this has been one of the most strategically important stretches of water in the world – and this morning, it was my job to be on deck with a roving microphone pointing out the interesting points along the way as we passed one of the world’s great cities.

It’s amazing to think how much shipping traffic passes through the narrow and congested waters of the Bosphorus past one of the largest cities in the world – huge oil tankers, cargo ships, warships, submarines and hundreds of ferries all sailing past a city of 15 million people. As we sailed down, under the two huge suspension bridges that connect Europe and Asia, then the soaring minarets of Istanbul’s exotic mosques came into view – even my ramblings couldn’t take away from the magnificence of the views.

So, after 2 hours or so of talking away in the sun, I then had half an hours rest before going to the Cabaret Lounge for my final lecture of the cruise on Athens. Then, a few hours rest, before another stint on deck with the microphone, as we sailed through the Dardanelles, the second place where Asia and Europe almost come together. The Dardanelles stretch for about 60 miles, narrowing to just over a mile in places, connecting the Sea of Marmara to the Aegean. As the place that provides access to the Black Sea and Constantinople/Istanbul from the Mediterranean, this area has witnessed some huge battles to control its strategic location.
So, on the way I pointed out the many monuments to the disastrous Gallipoli Campaign from World War One, where 100,000 British, French, Australian and New Zealander troops died, and 250,000 Turkish troops died, in a largely pointless campaign. I pointed out the location of Ancient Troy on the hillside on the Asian side, overlooking the Dardanelles where the epic Siege of Troy took place. I pointed out the spot where legend tells us that Leander swam across to meet up with his lover Hero every night (a feat copied by Lord Byron in 1810), and various castles and forts along the way. After 2 more hours in the afternoon sun I was almost melting, and so I took a vow of silence and refreshed my throat with a couple of glasses of much-needed cool white wine – it’s never tasted so good!