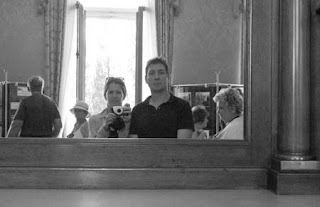 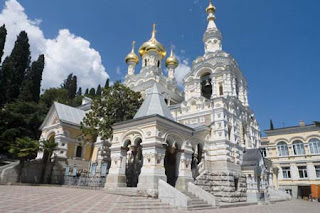 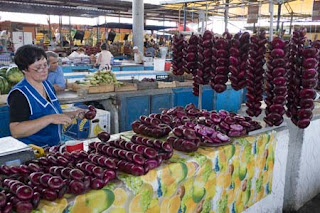 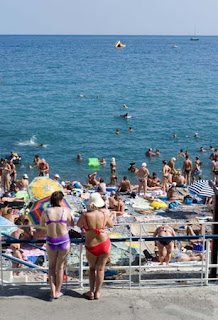 On another boiling day, we went on a trip to see the Imperial Palaces that were built in the beautiful countryside around Yalta. Our first stop was at the Massandra Palace, an attractive palace of turrets and ornamental gardens (now charmingly overgrown) that wouldn't look out of place in the Loire Valley.

In spite of its beauty, the palace was hardly ever occupied over the years. It had originally been commissioned by Count Vorontsov who died before he could use it, then bought and finished by Tsar Alexander III who died before he could use it, and then taken over by his son Tsar Nicholas II who evidently didn't want to risk it. Nicholas just used the Palace as a picnicking spot on his trips up into the mountains for hunting, so the Royal Family never slept at Massandra – not a bad position to be able to turn your nose up at a residence as palatial as this.

Nicholas preferred to spend his time at our second stop, the gleaming white Livadia Palace that he'd built for himself overlooking the sea. As this was our second time here in two weeks, we just soaked up the opulent atmosphere of the place. Our guide reminded us that after the Revolution, Nicholas asked the Bolshevik government if he could just retire here to his little palace at Livadia to live out the rest of his life as an ordinary citizen. I would imagine that Lenin and his colleagues considered that offer for all of a tenth of a second, before they signed the death warrants of the Romanovs.

After lunch, we explored Yalta on our own, passing the statue of Lenin that faced the busy McDonalds directly across the square from it – Lenin now is as out of step with the spirit of the age, as the Tsar was back in Communist Russia. We then climbed up the hill behind town to visit the Alexander Nevsky Cathedral, with its golden onion domes gleaming in the hot afternoon sun. Our next task was to buy a birthday card for our godson ,Will – more difficult than you'd think in Yalta. Extensive searching revealed that there appears not to be a single shop in town selling birthday cards – I don't know if birthdays aren't particularly celebrated in Yalta. The one good thing about our search is that we came across the busy, and slightly grungy produce market behind town – it was nice to see the "real" side of Yalta, rather than just the holiday resort side of things.

As the heat got ever stronger, we decided to retire to a bar overlooking the incredibly packed beach and to watch the parade of sunburnt holiday makers passing by us in their swimming costumes – either supermodel stick thin, or pot-bellied darts player physiques, there appears to be no in between in the Ukraine.