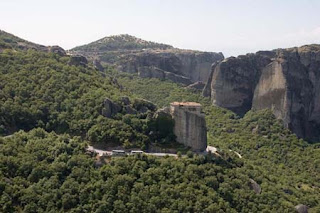 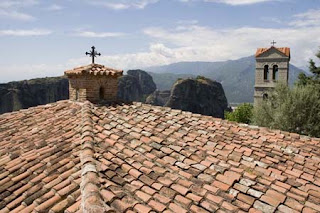 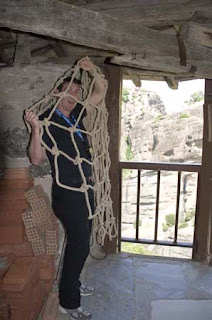 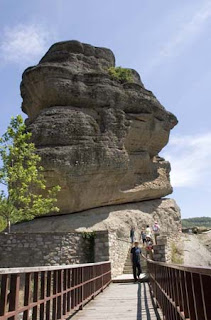 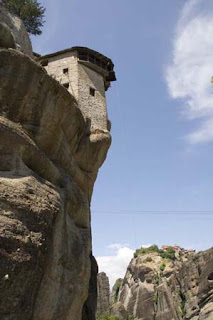 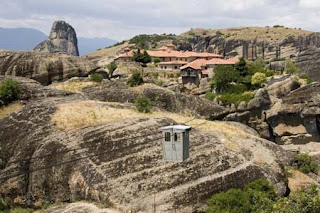 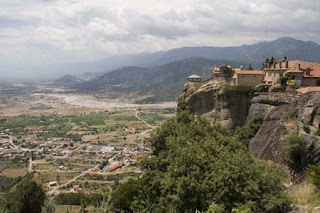 From Volos, we took the 2 hour trip to see the spellbinding landscapes of Meteora, with their remote monasteries perched precariously at the top of a bizarre forest of rock pinnacles shooting up vertically from the planes below them. This really is a place with a “wow-factor” – just listening to the “wows” of the guests as they got off the coach and saw this other-worldly combination of rock and monastery, made you understand that this was one of the most spectacular sights in Europe. The monasteries seem to be part of the rocks they’re built on, and really look like they come from the set of a fantasy film like Lord of the Rings.

The monasteries were first founded in the 13th century, when the monks would have been part-priests, part-mountaineers to get up the sheer sides of the pinnacles, and then all the building materials and supplies would have had to been hauled up in rope baskets. Up until the 20th century, all visitors to the monasteries would have also had to climb into a rope baskets and start praying that the ropes and the people pulling them up to the top were strong enough.

Even today, there’s about 60 monks and nuns living in these most remote and austere of locations, although the monastic peace is regularly disturbed by the constant tour groups “wowing” their way around their retreats. We were only allowed into the main church and courtyards of the monasteries, while the private quarters of the monks were off-limits to visitors – a couple of guests speculated that they must have a well-stocked bar, satellite TV and bubbling Jacuzzis behind the scenes, and that the music sound system gets cranked up as soon as the coach parties have gone on their way.