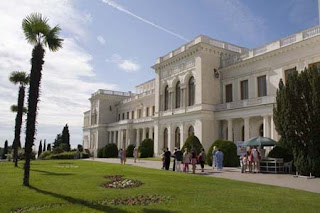 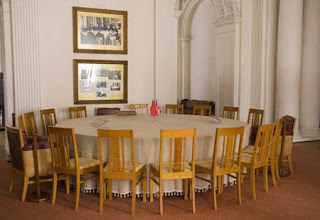 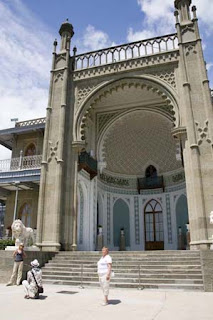 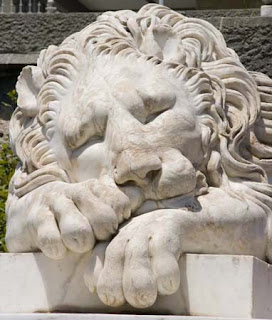 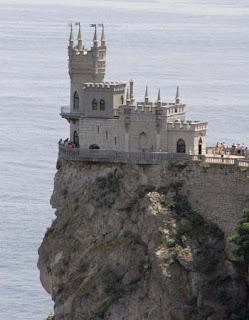 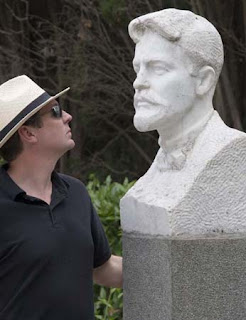 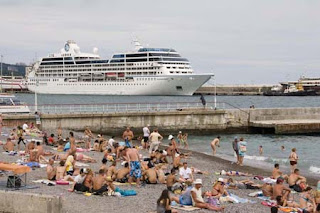 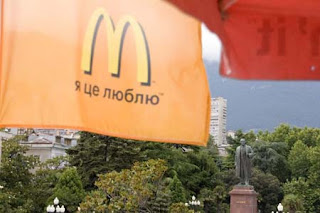 Yalta is like a charming fusion of St Petersburg (grand royal palaces), the Cote D’Azur (with its pine clad hills and sub-tropical climate), and Blackpool Beach (with its beaches of sunburnt working class holidaymakers frying by the sea).

We first set off to explore the grand side of Yalta, which in the 19th and early 20th century was a playground and summer escape for Russian royalty and aristocracy. We first visited the beautiful white Livadia Palace, the last summer home of Tsar Nicholas II, the last Tsar. When you saw all the poignant photos of the Romanovs happily at play in their seaside idyll, it was interesting to think about what a tragic fate was to hit them just a couple of years later after the revolution. You also couldn’t help but feel how far removed these opulent and carefree lifestyles captured in sepia were from the grim realities of life for the ordinary Russian – this really was the end of an age.

After the Romanovs, the Livadia Palace also became famous as the site for the tense World War Two negotiations between “The Big Three” – Churchill, Roosevelt and Stalin – in the Yalta Conference in 1945. Our guide took us through the momentous deals, compromises, intrigues and arguments that took place in these historic rooms – decisions made that shaped the post-war world – paving the way for the Iron Curtain, the Cold War, the United Nations and the final eclipse of Britain as a world power.

Next, we went to the huge Vorontsov Palace – an ostentatious Palace built by one of Russia’s richest aristocrats, Michael Vorontsov. Again, the connection with the Yalta Conference was a strong one; this was where Churchill and the British delegation stayed. The Palace was another lavish over-the-top affair, that reminds us that super-spending Russian plutocrats like Roman Abramovich are just following in a long tradition of excess and conspicuous consumption.

Our next stop was for lunch overlooking The Swallow’s Nest – an early 20th century folly, designed to look like a fairy-tale castle, perched at the top of a steep cliff. This is the obligatory photo stop of any trip to Yalta, and really has no historical or architectural significance, although it did make a lovely backdrop to our alfresco lunch accompanied by the soothing music of a string quartet.

By now, the food, heat and music made everyone ready to drop off, but we still had one more stop to see – the house of Checkov. I guess you have to either be Russian, or more cultured than me, to appreciate the huge significance of Checkov in the literary world; but, even if you weren’t starstruck at worshipping at the altar of one of Russia’s literary greats , the house gave an interesting glimpse into 19th century middle class life in Russia, and the lush gardens must have been a soothing retreat for the ailing Checkov in the last years of his life.

At the end of the tour, we ventured along Yalta’s seafront – a place which would have been full of kiss-me-quick hats if this were in Britain. The pebbly beaches were packed with big-bellied lobster-red holidaymakers merrily knocking back cheap beers and enjoying the relaxed atmosphere. I wonder if the Crimea will ever be discovered by the British package holiday operators? It would suit them nicely.