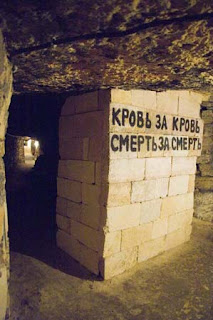 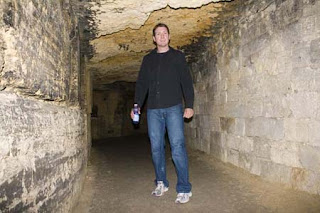 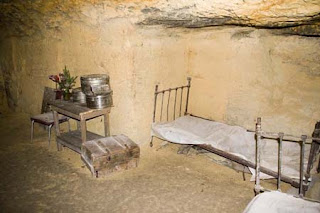 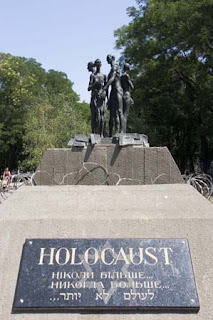 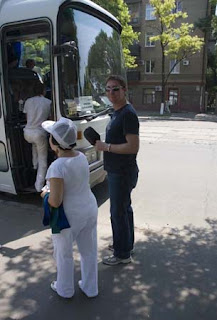 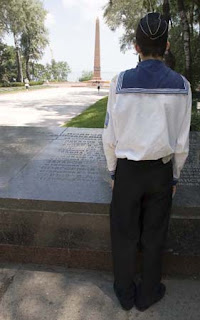 One of the most remarkable facts about Odessa is that running underneath the city, there are about 2,500kms of tunnels cutting though the limestone rock that the city is built on – an enormous network of tunnels that would stretch as far as St Petersburg if they were placed end-to-end.

Tracy was relieved to hear that, unlike Rome or Paris, Odessa's Catacombs weren't tunnelled out to house the dead – instead they were the underground quarries for the limestone rock that the city has been built out of. Aside from being a fascinating site to explore, the added bonus of visiting the Catacombs is that they are cool – the temperature at the surface was a hot and humid 35 degrees, but once you'd descended into this underground labyrinth, it was a distinctly chilly 8 degrees down there.

We had driven about 10kms out of town to visit a section of the Catacombs that had been used by the Russian Partisans after the city had been captured by the Nazis in 1941. The Partisans would shelter in this dank and dark refuge, safe in the knowledge that the Nazis would never be able to find their way through the maze of tunnels, and then they'd emerge at night on sabotage missions to hamper the Nazi occupation force. Life must have been incredibly hard for the Partisans living underground in virtually complete darkness, knowing that the Germans were constantly trying to gas them out of their subterranean refuges, or to torture or bribe people to betray their whereabouts.

Even though the underground route for tourists is fairly well lit and marked, you could still feel that you were only one wrong turn away from spending the rest of your life groping around in the darkness trying to find your way out of the labyrinth – supposedly there are still the ghosts of lost Nazi soldiers wandering around the network of tunnels.

Our local guide for this tour was a tiny old lady, well under 5 foot (one of the guests rather unkindly said she was trying to work out which of the Seven Dwarves she reminded her of), but once we got down into the tunnels we could see why she'd been picked to lead our group. While most of us had to stoop our way around, she was able to breeze along without worrying that she was going to knock herself out at any point like the rest of us.

As we returned to the surface at the end of the tour, the heat and humidity began to rise again, and we stripped off the layers of clothing and emerged blinking into the bright sunlight. On the way back to Central Odessa, we stopped at the haunting Holocaust Memorial, erected in the square where 60,000 Jews had been gathered by the Nazis, stripped of their clothes and valuables, and loaded into trucks to be transported to some villages outside the city. There, they were crammed into large barns which were then set alight and they were all burned to death – when you're told such horrifying stories like this, then you began to understand why the Partisans were willing to put up with such hardships in the Catacombs to fight the brutal Nazi occupation.

That evening, we went out on the town in Odessa – Saturday nights here are incredibly busy and lively, so it was nice to be able to have an overnight stay here. Even better, this is a very cheap place to go out – beers don't cost much more than a pound, and you can go for a good meal out in a central restaurant for about £10 a head. As we headed back to the ship at around midnight, we were passed by quite a lot of the crew going the other way – they don't get much of a chance to let their hair down away from the ship, so they appreciated the overnight stay as much as we did. The reports back from their nightclubbing experiences are that the local girls are amazingly beautiful, and the beer is amazingly expensive – rather than $1.50 a pint in the bars we went to, it was $10.00 – sometimes it's good to be too old to go to nightclubs.