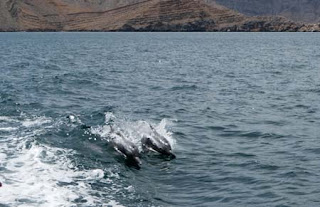 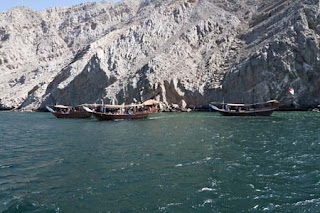 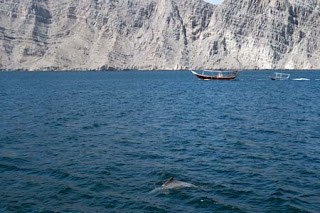 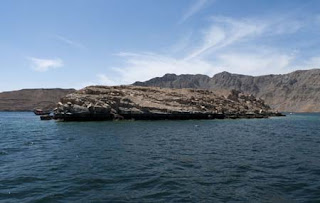 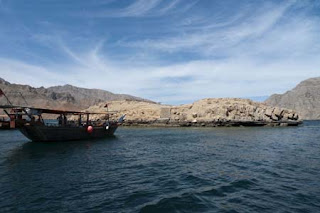 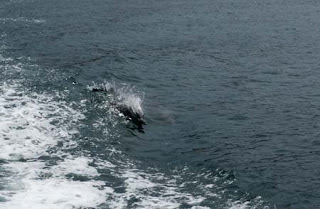 Khasab is one of the quietest cruise destinations I've been to. That's not meant as an insult, because it gives you access to some beautifully unspoilt and spectacular scenery that's about as off-the-beaten-track as it's possible to get.

Today, I took the best way to see the area - a boat trip on a dhow into the spectacular fjords of the Musandam Peninsula. The presence of the fjords have led the tourist brochures to rather optimistically call the Peninsula, "The Norway of Arabia" – which is stretching the poetic licence a little, seeing as these sun-baked and barren landscapes couldn't be much more different to Norway; but the fjords are pretty stunning nonetheless.

As you glide into the silent fjords, you're surrounded by sheer walls of brown and grey rock, marked by undulating stripes of different coloured stone – this most peaceful of places must once have been the scene of some very violent geological activity.

As we slowly cruised along, we spotted some humpback dolphins playing around in a cove, so we sailed over to see these beguiling creatures. They proved to be quite camera shy, because every time I had one lined up in my camera lens, he'd dive down and then reappear on the other side of the dhow, hanging around just long enough for me to rush over there, before disappearing again. So, I have about 100 pictures of empty sea, or a splash of white where a dolphin may once have been – I think I actually caught a tantalising glimpse of a dolphin on camera in only three pictures.

They must have been feeling guilty, because, later on, they decided that they'd put a proper show on for us, by riding along in our bow wave, just under the surface of the water as we gathered some speed – our dhow 's engine labouring and chugging away, while they effortlessly kept up with us, every now and then leaping out of the water to breathe.

We stopped off for a swim (not with the dolphins unfortunately) at Telegraph Island – one of the most remote and unforgiving parts of the British Empire in the 1860s, when servicemen were sent to this tiny island in the fjord to guard a new Telegraph cable that communicated with India. The heat and isolation would slowly send them mad, and led to the phrase "going round the bend" entering the English language – from the days when a posting round the bend of the Straits of Hormuz was enough to drive you mad.

So, as the wind got up we headed back to the port – unfortunately it was too windy for most of the Iranian smugglers who make the port such a hive of activity. You'd have to be round the bend to go through the Straits of Hormuz in high winds in such small boats.