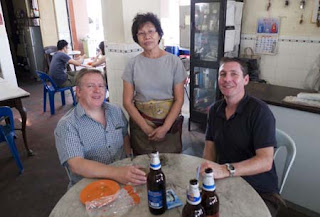 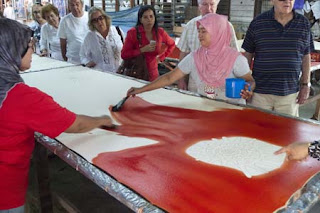 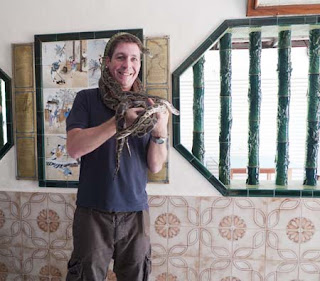 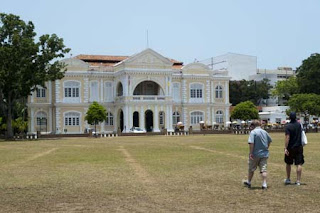 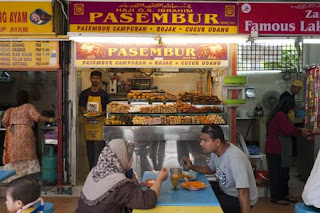 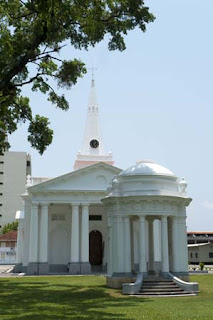 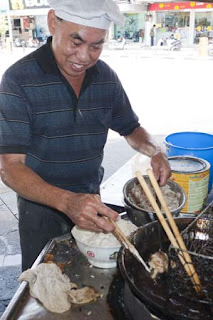 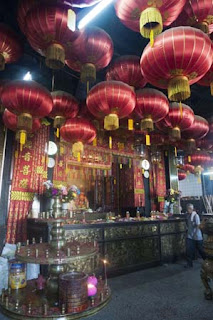 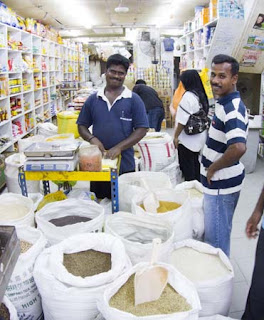 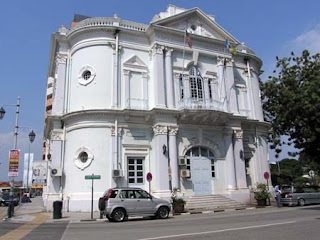 On a phenomenally hot day, I did a tour in the morning to explore the interior of the Malaysian island of Penang; and then, in the afternoon, we explored the fascinating streets of its historic capital Georgetown.

Penang was the first place of British settlement on the Malaysian peninsula, and its capital Georgetown quickly became a colonial boom town in the late 18th and early 19th century. That was before the phenomenal rise of Singapore to the South gradually eclipsed it. The upside of Penang's decline is that much of its splendid historical architecture was preserved rather than built over (as happened in Singapore); so that even today, as the city's now booming again, this place has a really historical feel to it.

We started by driving along the northern coast away from Georgetown, passing by all the modern tourist resorts that have turned the island into a beach resort these days. Our first stop was at a batik factory, where we were shown the painstaking manual processes involved in producing these colourful designs. To be honest, as a boring dresser in dull blues and blacks, I'm not really into the bright colours and florid designs of batik, but you couldn't help but be impressed by the skill of the workers and imagination of the designers.

Then we headed up the winding roads into the mountainous interior of the islands, passing by lush forests of exotic fruit trees. We stopped off at a fruit stand, where the owner talked us through the various spices and tropical fruits grown on this fertile island, before coming back down to the coast again.

As we approached Georgetown, we passed by huge industrial parks where we saw plenty of microprocessor factories and hi-tec manufacturing plants, that testify to Penang's latest boom time. But, as a contrast to this, right next to the industrial area, we stopped off at an old Chinese temple which (through some mystical force) was famous for attracting venomous snakes to hang around in its trees.

Some of the snakes had been de-venomed for stupid tourists like me to have them draped around our necks and hung over our heads. At one point, with two pythons around my neck, I could feel one of them begin to tighten his coil ominously around my neck, while the smaller one began to poke his tail into my eyeball – fortunately, the photo opportunity was a bit of a production line, so before you could say "strangled tourist", the slithering serpents were whipped off my neck to be hung around their next victim.

After this, we headed back to the ship where it was a quick turnaround before Tracy, David (the guest chef) and I headed into the baking streets of Georgetown to find some good food. We passed the old British fortress, Fort Cornwallis, and headed to the Padang, the centrepiece of British rule, surrounded by impressive British buildings on 3 sides, and the sea on the other.

Then, we headed in amongst the rows of old Chinese shophouses that still form Georgetown's evocative historic centre, as we passed plenty of Chinese temples and clan houses. We were heading for a down and dirty restaurant called Khing Pin that we'd seen recommended in the guide books – it certainly delivered. The lady serving us was lovely and had limitless patience for our stupid questions and served up some delicious noodle dishes washed down by some cold Tiger beers.

After this, we wandered to Little India in search of its spice shops for David's upcoming food demonstration. The streets were full of people, and the "Little India" tag was certainly lived up to, with the noise of Indian music blaring out of tinny speakers and the smells of curries wafting towards us. Unfortunately, no-one here had heard of the Indian ingredients that David was asking for – this Indian community was founded here over 200 years ago, so maybe a little bit of India has been lost in Little India.

As we slowly melted in the heat, we headed back to the ship for some re-hydration.

A very enjoyable day - for a place that can simultaneously be a beach resort, an industrial centre (with lots of unspoilt lush countryside behind it), a culinary mecca, and a repository of historic architecture all at once, Penang has a lot going for it.