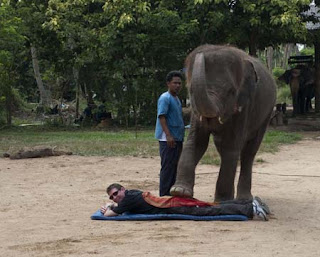 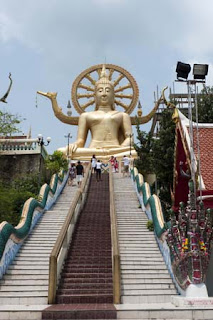 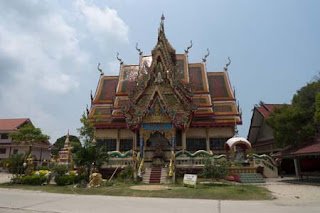 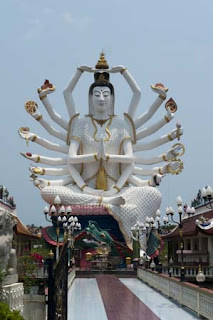 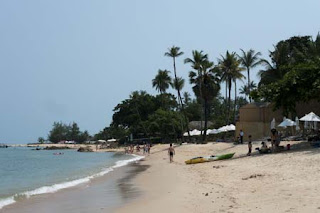 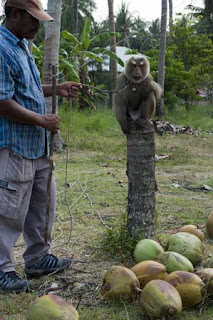 35 years ago, the Thai island of Ko Samui was undiscovered, undeveloped and untouched – in fact, there wasn't a single paved road on the island till the mid-1970s. These days, that's all changed, as this has become the second most popular Thai island destination; and the international airport that was built in the late 1980s now brings large numbers of sun-starved westerners over here every year.

So, beyond the beach resorts that have sprung up along the coast in the last couple of decades, there's not a huge amount of history or culture to discover here. But, in an attempt to find as much culture as was possible, I did the "Ko Samui Highlights" tour.

We first went to see the Big Buddha Statue – a sight that delivered what it promised - an enormously big golden statue of a seated Buddha at the top of 72 steep steps. It was a picturesque spot, and interesting to see that many of the souvenir stalls had signs in Russian – Samui is clearly becoming a popular Russian destination these days.

Next, we went to a gleaming modern temple complex – the colourful Lai Leam Temple – which was built in 2004, which at least shows that the tourist trade has brought in enough wealth for the locals to add to their religious infrastructure (not that we saw a local there apart from a couple of dogs). Maybe it was too hot at midday – mad dogs and Englishmen etc etc.

By now, it was time for lunch, so we went to a really gorgeous resort, where we had a delicious Thai lunch by the sea. The place was so relaxing, it was so hot, and the sea breezes so cooling that we could have stayed there for days.

But, it was time to get on the road again, so we headed off to an elephant show, where I was "volunteered" to be a subject (victim more like) of an "elephant massage". Basically, I had to lie face down on the floor while a two-ton elephant lifted an enormous foot and patted me on the backside and blew its nose on my head – the things you have to do as a Destination Lecturer!

Our final stop was to a coconut plantation where they showed us how monkeys were trained to shin up a tall coconut tree, select a ripe coconut and then twist it until it fell to the ground. Seeing a monkey being put to work like this with a chain around his neck made me feel a little uneasy, although we were told that the monkeys live with their trainers as part of the family and are willing workers – do we feel that it's similarly unfair to use sheepdogs?

On a blisteringly hot day, we were all glad to get back to the ship for some A/C and to put our feet up.