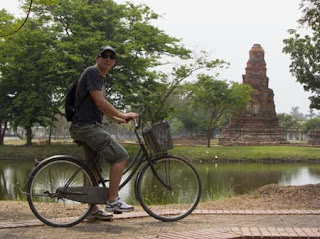 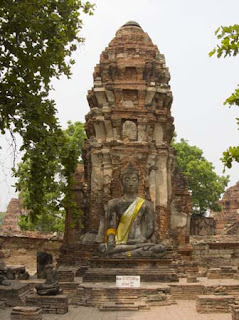 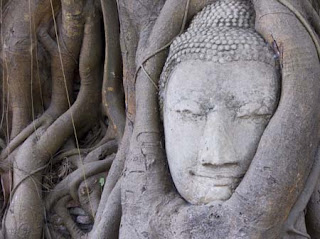 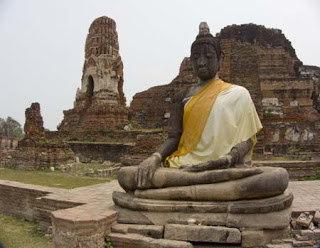 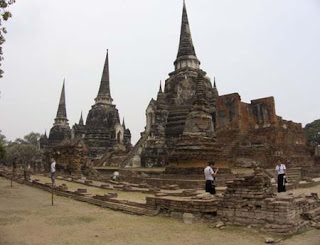 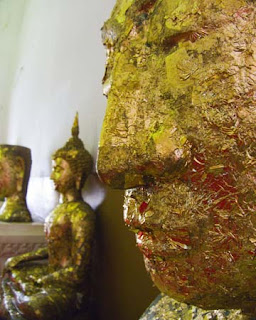 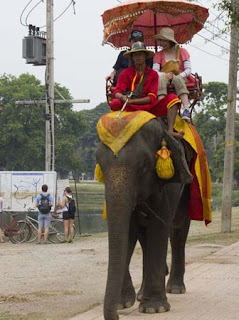 Our mission today was to find our way to the former royal capital of Ayutthaya, about 70 miles north of Bangkok. On paper, this sounded like a relatively straightforward thing to do – in practice, this was to be a very complicated task.

We wanted to get the 8.30am train (the one after was at 10.30) to Ayutthaya from Hualamphong Station, which involved us getting out of the port before the shuttle bus had started – we decided on the train option to avoid getting caught in traffic. So, we had to negotiate a price to get us to the station with the taxi sharks who had a monopoly at the port – because of the monopoly, the price was way over the odds. So, we grudgingly got going with the one that offered the least ridiculous price, and off we headed.

Unfortunately, as the clock ticked down towards our 8.30 deadline, Bangkok's awful traffic seized up into its usual gridlock, so as we ground to a halt, we bailed out and headed by foot to the nearest metro station. Eventually, as the mercury rose and the clock counted down, we found it and hopped on it to the train station.

This was one of those journeys where every time we'd given up all hope of getting there on time, suddenly it looked like we just might make it. So, we got in at 8.20, and ran to the ticket counter to buy a ticket – there was a queue. With 2 minutes remaining I got to the front and he refused to sell me the cheapest ticket, so we had to pay for the "luxury" of 2nd class. Finally, we run to the platform with 30 seconds remaining, literally dripping with sweat.

Inevitably, as we sat panting on the train, it didn't leave for a further 15 minutes! And then it proceeded at funereal pace through Bangkok – it would have been quicker to walk. Then, somehow, given the slow speed we were travelling at, we had a collision with a motorbike (only in Bangkok do motorbikes drive into trains) – a further delay of 20 minutes.

At last we got going again, and we almost went at a decent pace, until the train then stopped again – apparently the non-existent "air-conditioning" had broken down, and there would be another delay of indeterminate length.

We were beginning to wonder if we'd ever get there, so we bailed out again, and tried to get a cab to Ayutthaya – again having to shout down some ridiculous quotes, before finally getting a guy to put it on the meter. Somehow, miraculously, his car didn't break down, the traffic didn't seize up, and we got there – although it then turned out that he'd never been there before and had no idea where to drop us off.

So, at the first sign of a ruined temple, we got him to stop and we tried to get our bearings. We went into a guest house where a lovely tiny little lady with three teeth dotted around her gummy mouth gave us a map and showed us where the hell we were. While we were there, we spied some very old bikes – we thought we might as well use our fifth form of transport to complete this epic journey.

So, it was a bit of a trial to get here, but was it worth the effort? Yes, yes and yes. Suddenly a frustrating day turned into a fantastic day, as we cycled along the wide roads and on pathways through grassy parks on our cronky old bikes (it didn't matter that the brakes hardly worked), and we came across magnificent old ruined temples sitting next to picturesque lakes.

Ayutthaya had been Thailand's (or Siam as it was then) capital from the 13th to the 18th centuries, and in its heyday it was one of the most magnificent cities in the world – with a population of over one million people, it was the largest city in the world too. Unfortunately, it all came crashing down when the city was destroyed by the Burmese in the 1760s, and so Ayutthaya was abandoned while Bangkok was founded further up river.

So, what's been left is only a tiny fraction of this former splendour, but even in the remaining tumbled-down brick temples and towers, you get a strong hint of what a magnificent place this once must have been. The temples are like a smaller version of Angkor Wat, and they're a wonderfully evocative set of ruins to explore – wonky prangs just about still standing, decapitated buddhas, and roofless reception halls made out of crumbling red brick.

We had a great time exploring and cycling around, in a relaxed atmosphere that seemed a world away from chaotic and claustrophobic Bangkok. However, we were very aware that our journey to get here had been such a mission, so we wanted to leave plenty of time for our return trip. Thankfully, this proved to be way, way simpler and much quicker than the trip out – and one tenth of the price too. We went to the bus station and just caught the bus back – very simple and very cheap. Why didn't we do that on the way out?

At the end of a fabulous day, our next plan was to go out for another meal, but the journey and the heat had absolutely drained us, so we decided to have a night in, to save some energy for Tracy's big birthday the next day.