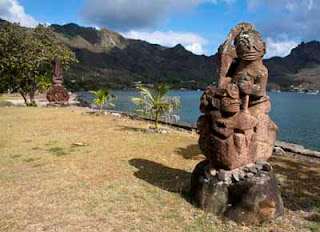 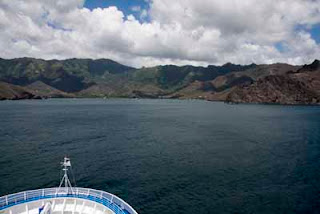 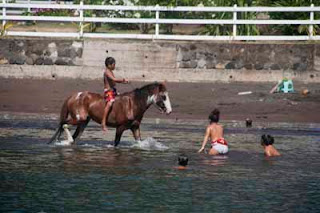 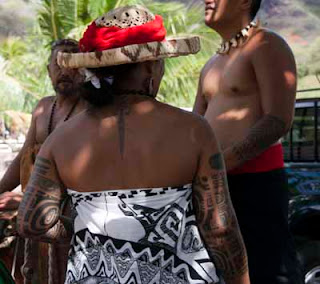 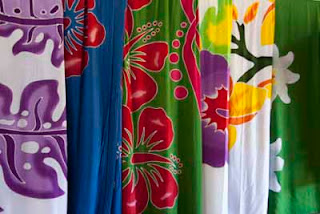 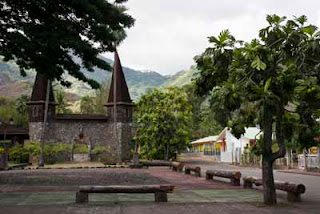 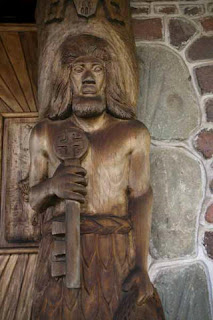 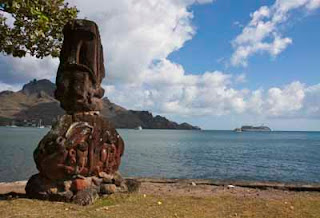 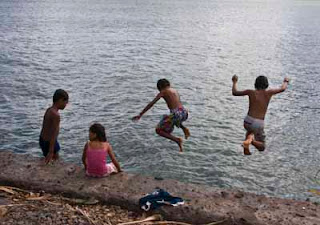 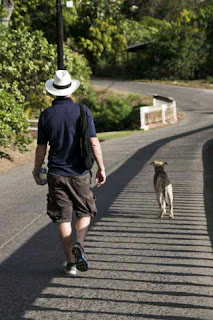 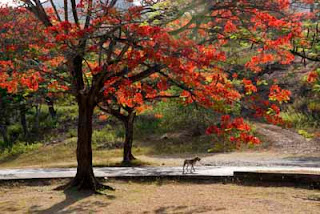 At last we have reached dry land – the remote little island of Nuku Hiva in the Marquesas Islands. As we arrived at lunch time, it meant that everyone had the chance to be on deck for our spectacular sail-in to Taiohae Bay. As we sailed around the island, the steep plunging cliffs were a fairly forbidding sight, and then a gap in the cliffs appeared, and we slowly inched into the sheltered bay.

The bay is one half of an ancient volcanic crater that collapsed in on itself millions of years ago, leaving behind a bowl of rugged cliffs, with a narrow strip of coastline at the bottom. This was home to Taiohae, which is the biggest town in the Marquesas, which isn't saying much, since it's home to about 1,000 people.

The sleepy atmosphere in town was contributed to by the fact that it was a Saturday afternoon (when the few shops there are, are generally shut), and by the fact that the ship had commandeered virtually every 4x4 on the island (plus their owners) for the ship's tour of Nuku Hiva's rugged interior.

There was such a sleepy atmosphere that it felt like the pace of life had slowed down to a crawl, as we walked around the waterfront, dotted with interesting Polynesian statuary – plenty of squat "tiki"(humanoid carved stone figures) looking like visiting aliens, with helmets and big goggly eyes. Everyone we passed greeted us with a cheery "bonjour", and we were adopted by a friendly dog who decided to chaperone us for the day.

He shadowed us over to the town's one and only architectural set-piece, the Catholic Cathedral (it's the Cathedral for the whole of the Marquesas), which is an attractive modern building from the 1970s, that boasted some beautiful woodcarvings and an airy atmosphere - its open sides allowing in cooling breezes.

We popped into the general store to see what was on sale and what the prices were like – as you can imagine in a place as remote as this (over 3,000 miles from the nearest continental landmass), there was little in the way of fresh produce, and everything was extremely expensive. A bottle of French wine cost around $25, while a small packet of breakfast cereal (they didn't have Frosties, which is the main reason that I couldn't live here) was $7.50.

The abiding memory that I'll take away from our day here is that beautiful setting of the bay, lined with flame-red flamboyant trees under the towering cliffs, and the incredibly relaxed atmosphere – what a chilled out start to the World Cruise.