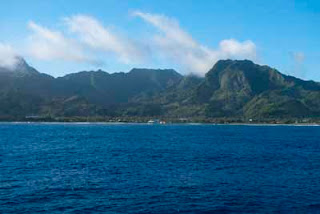 We had an extremely rocky day in the Pacific after leaving storm-hit Bora Bora, so the chances weren't looking good for getting into the Cook Islands. Unlike the French Polynesian islands, Rarotonga (the main Cook Island) doesn't have any large bays to shelter in, or a break in the reef to provide a safe anchorage, so the sea needs to be calm for us to get off the ship.

We did wake to find clear skies and less strong winds, but there was a large swell caused by a tropical storm off the coast of New Zealand. With the swell reaching up to three metres, the ship was lurching around a fair bit, which meant that the little tender boats would have been tossed around dangerously.

So, the captain made the sensible (but disappointing) decision to cancel the call here – which meant that all we had was a tantalising glimpse of this beautiful tropical island from the sea.

We will be back.