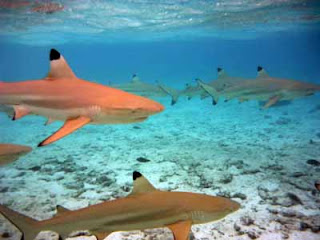 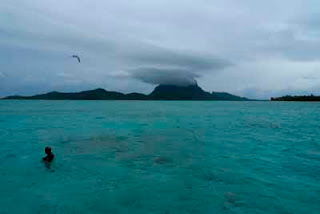 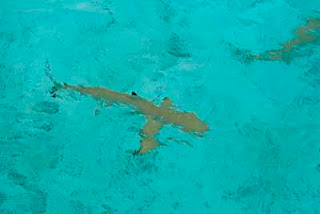 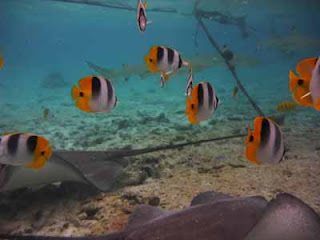 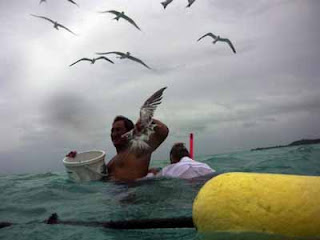 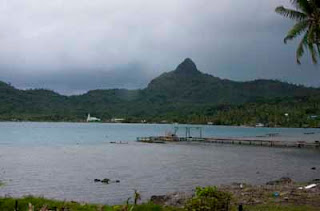 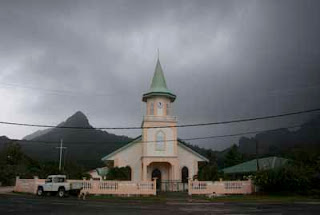 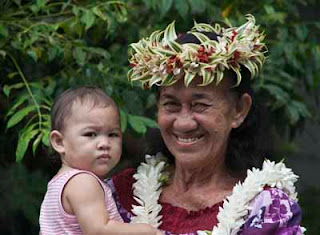 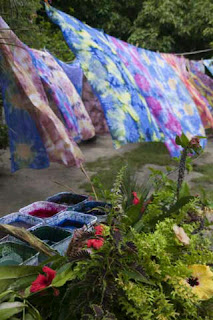 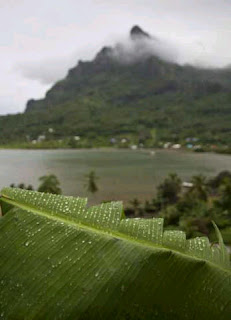 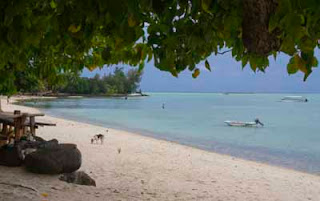 With such horrendous weather hitting the island, this was probably not the best day to be going on a snorkelling and island picnic tour on an open boat; however, in spite of the terrible conditions, we still had some pretty amazing experiences along the way. Of course, if the sun had been shining, then the lagoon would have been truly spectacular, the jagged mountains would have been breathtaking rather than covered in mist, and the visibility underwater would have been as wonderful as normal.

As we sailed away from the tender pier, the heavens opened and we were already soaked even before we even got to the snorkelling spot. With the wind blowing across the lagoon, it was definitely warmer in the water rather than shivering on the boat, so it was a case of diving in as soon as possible. Even allowing for reduced visibility, the views below the surface were fantastic - huge numbers of fish in all shapes and sizes.

As the rain let up, we decided to press on with the trip, and head over to the reef to feed the sharks and the rays. Even though this boat tour runs every day, I hadn't expected to see so many sharks circling the boat within just a couple of minutes of our arrival. These were black-tipped reef sharks which we were assured were harmless, although when some fish were thrown into the water for them, they thrashed about fairly menacingly in a violent feeding frenzy.

So, now was the time to see if I was a man or a mouse, as the guides offered us the opportunity to swim in amongst the sharks. My heart was saying just do it, and my head was saying don't be such an idiot, but in the end I decided to just go for it. By now, my heart was beating out of my chest as I climbed down the ladder into the water, with the sharks circling about 6 feet away. However, it was when I put my face under water and went face to face with them that the sheer terror kicked in. At times I was just a few inches from these primeval-looking beasts – there must have been at least 20 of them in the water with us.

Just to complete the picture, faster than you could say "Steve Irwin", at least 4 sting rays swooped in to join us, seeming to revel in freaking me out by occasionally wrapping themselves around my legs with their rubbery bodies. Every touch from a sting ray convinced me that it was a shark nudging my leg prior to biting it off, but in fact, the sharks thankfully kept a respectful distance.

After a few minutes, the fear began to wear off, and it seemed to be fairly natural to share the water with these scary-looking predators; although, inadvertently treading on a sting ray soon brought my blood pressure up to bursting point again.

Elated by these wonderful close encounters of a shark kind, everyone forgot about the disappointing weather, as we set off past the luxury resorts with their thatched bungalows over the water (people pay over $1,000 a night to stay here), heading to a deserted motu (sand island) for a "picnic lunch". At this point, the heavens opened again and the rain lashed down heavier than ever. Morale had begun to plummet by the time we reached our idyllic motu and we soggily sheltered under a tent to eat. It had begun to feel like a cub scout camp I'd been to as a young child in rainy Britain, when everyone was so miserable that they phoned their parents to come and pick them up.

We ate our food, prayed for deliverance from the deluge, and set off back to the pier. Our prayers were not answered. It scarcely seemed possible that the rain could get any heavier, but it did – I honestly could not have been more drenched if someone had poured 5 buckets of water directly over my head. Fortunately, by now, hysteria had set in, and most people had begun to find the whole thing amusing.

It was such a shame, because this tour had all the ingredients for being one of the most spectacular you could do – one of the most beautiful islands in the world, wonderful sealife, amazing views across the lagoon, and unforgettable encounters with the sharks. Sometimes the weather does not always co-operate.