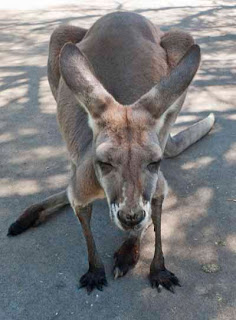 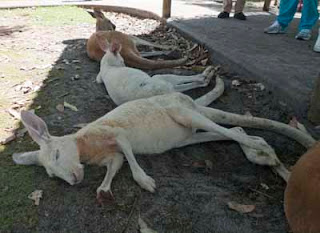 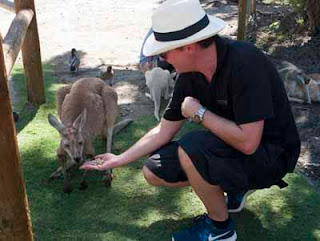 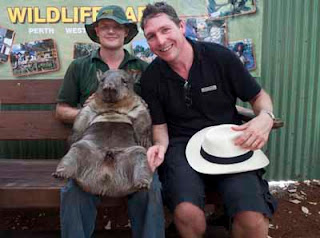 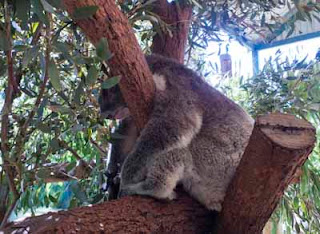 For our second day in Fremantle, the weather hadn't cooled down one single bit – in fact, it was almost 40 degrees out there in the relentless sun. I used the morning to visit a cafe and do some vital wifi-ing, and then it was time for my afternoon tour, entitled "Wine and Wildlife" – an interesting combination.

So, we drove out to the Swan River Valley to visit the Sandalford winery where, in the name of research, we ploughed our way through several bottles of decent wine – most of them had come from the Margaret River area, and the shiraz was my favourite.

Suitably hydrated and fortified, it was time to play with the animals. By now it was over 40 degrees, but the prospect of playing with koalas, kangeroos and wombats just about kept us awake. It appeared that the kangeroos suffer in the heat just as much as we do – most of them were sprawled out in the shade, and were so zonked out, you had to get up close to make sure that they were actually alive.

The good thing was that they were way too tired to be bothered by us coming up to them and stroking them, and the odd one just about had enough strength to hop over to me to eat kangaroo feed out of my hand. This left me with a handful of crumbs and kangaroo dribble which was less than pleasant, but I'd stupidly forgotten my hand sanitiser.

Next, we went to see a semi-comatose wombat who was happy to sit in an undignified sprawling pose for photos with us – he was just about the most over-weight, hairy and lazy thing that I've met since I played rugby at the Old Tiffinians, but at least, even with my sweaty hair caked to my head, I looked marginally better than him.

Finally, we went to the koala enclosure, where the spaced-out koalas moved so little that they looked like stuffed toys. Occasionally one of the energetic ones would steel himself for a big yawn and the twitch of a toe to show us that he was real. It was great to be so close to these beautiful creatures and have a gentle stroke of their soft fur.

By now, the extreme heat and the wine consumed was sending us all sleepy, so it was a quiet ride back on the coach through Perth to Fremantle.

So, that was the end of our Australian ports – now, we move on to the chaos (and thankfully cheaper prices!) of South East Asia. Next stop Bali!